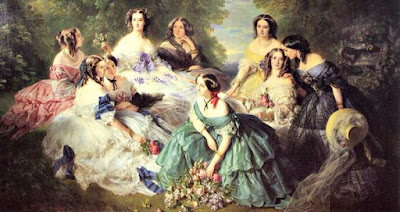 Whenever I mention that I write Victorian crime fiction, people always comment upon the infamous crinoline. Why on EARTH would women put up such a monstrosity? Well, they did, and surprisingly, with great relish. The crinoline, or hooped skirt was actually based on a design from the 1840s. In 1856, the American W.S.Thomson patented the metal cage crinoline and it became a huge hit in the USA, France and Britain. It was the first fashion to encompass all classes - rich or poor, you could still afford to wear it.

Although we find it hard to believe, women really loved the cage crinoline. At the height of its popularity, enough steel was produced in Sheffield to make half a million hoops in one week. It freed women from the constricting two petticoats: one flannel, one cotton, that they wore previously and gave them more ability to move their legs. And it was easy to hoick it up at the back when you needed to go to the privy or relieve yourself in the street (no public toilets).

Crinolines came in a variety of shapes, but they were not especially expensive, retailing at a third of the price of a dress. And if you were a skillful needlewoman - as most young women were in those days, it was easy to transform the style of an existing dress by the addition of a cage.

Spring steel shapes crinolines were light and flexible, and could be pressed out of shape temporarily, a useful attribute when trying to sit down, or get in and out of carriages and buses. Together with the tightly-laced corset, which emphasized a woman's tiny waist (the record was 13 inches), the crinoline gave the wearer a very ''sexy'' shape. This was enhanced by the way women had to walk: placing the foot outwards and describing a semi-circle, which gave a swaying motion to the hips. It was almost impossible to go at speed, so the slow, swaying gait was considered very alluring.


And cages and stays came in very nice colours. In Diamonds & Dust, Josephine King and her fashion mentor Isabella Thorpe visit a big department store, where they are informed by one of the female assistants that: ''We have some delightful articles in scarlet, Mademoiselle ... Zey came in last week, fresh from Par-ee.''

However brightly colored and popular, cage crinolines were not all good news however. Sitting down had to be re-learned, and getting through narrow doors or down narrow passageways was a nightmare. And the there was the ever present danger of high winds, which could leave you scrambling to hold your skirt down lest (oh horror!) your drawers were exposed to male passersby. Add to this the danger from open fires and gas lamps and wearing the crinoline could have fatal consequences: 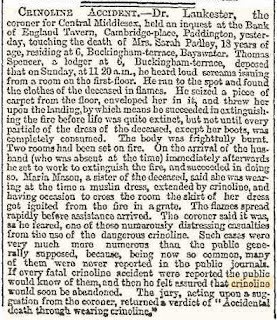 However attractive you felt, wearing a crinoline didn't make courtship any easier than it already wasn't. In November 1856, Blackwood's Edinburgh Magazine published a poem called 'Crinoliniana' which ended:

I long to clasp thee to my heart
But all my longings are in vain;
I sit and sigh two yards apart,
And curse the barriers of thy train.
My fondest hopes I must resign,
I can't get past that Crinoline!

The crinoline seems a perfectly ridiculous item of fashion to us today, but for the Victorians with their sense of propriety, it was the perfect device to distance a woman both physically and psychologically from her surroundings, from the real world and to preserve her femininity and chastity for her husband. In a sense, it was the real-life equivalent of placing herself upon a pedestal.