Transports of Delight: Why I love buses..

Before I reached 60, I never used buses. They were expensive, unreliable and took far too long to get where they were going, or so I thought. I have subsequently discovered how mistaken I was. Now that I am a member of the Bus Pass Crew, I know better. Apart from the occasions when they decide not to show up, there is very little about using the local buses that I don't like.

Interestingly, it was the presence of a local bus route, with named local stops, that was one of the things the Inspector on our Town Green Public Inquiry asked me about, when the obnoxious council barrister was trying to prove that where I live is not a proper ''neighbourhood''. He would only have to stand in the queue waiting for the 657 (it used to be the 625; we don't know why they changed it) or the 366 from Luton to see that we are a community.

I have got on the first morning bus into town, looked around, and realised that I know everybody on board. And there are some great conversations to be had. Here, using the bus has a set routine. You board and greet the driver. You scan your pass. You greet any passengers that make eye contact as you find your seat. You move to the back of the bus automatically if a mum and buggy get on. You vacate the 'elderly' seats without being asked. When you leave the bus, you thank the driver. If a stranger boards who is unsure of where they are going, you all pile in with your helpful ten pence worth.

Here, because it's usually the same set of drivers, they get to know who we are and where we catch the bus. I have known certain nice drivers to stop at non-designated stops to let elderly people off with heavy bags of shopping, and one morning, when I was walking up to the local school in the rain to invigilate, the bus drew alongside, slowed, and the driver gave me a 'do you want to get on' look. That's how we roll where I live. 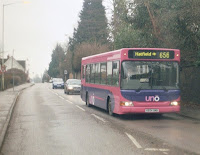 The other thing about buses is that occasionally, something happens that just fills you with delight and reminds you that the world is so much nicer than it appears on the surface. Like the time I was travelling back from Welwyn Garden City and the bus stopped to let a little playgroup board. The kids were wide-eyed, noisy and fizzing with excitement at catching a bus. The leaders settled them into the front seats (hastily vacated) as best they could, but it was a bit like trying to organise a panic. As the driver pulled away from the kerb, one of the leaders gamely squatted down in the gangway, and very discreetly and slightly anxiously began to sing ''Wheels on the bus'', in an attempt to calm things down.

And then, something happened. First, the people in the nearest seats started to join in. Then those sitting behind them joined in, followed rapidly by those further back, so that by the time the bus crested the hill outside the town, everybody on board (except for two college students at the rear of the bus who were desperately trying to pretend they weren't there) was singing along to ''Wheels on the bus'' and doing the hand gestures, to the rapturous joy of the little playgroup, who clearly thought this was what happened on every journey.