Hello. My name is Carol and I'm a hypochondriac. I am also Jewish. You don't have to be Jewish to be a hypochondriac, but if you want to do it properly, being Jewish gives you a definite edge.

No, I don't know why. Maybe it's thousands of years of knowing we are the Chosen People while being constantly told to go and be chosen somewhere else. Listen, what do I know? Am I an analyst?

I do know that I spend a lot of time on the internet googling symptoms that I might have. And I mean A Lot of time. As a result, I have narrowly escaped a whole raft of illnesses, including some that are apparently only present in cattle.

Being a Jewish hypochondriac means that I always make sure I add 'and cancer' just before I click the search button. Because that is the constant fear, lurking within the true devotee to self-suffering.

Obviously, having actually had cancer twice, I have an edge on other Jewish hypochondriacs, and on you as well. But I don't want to brag, here. Let's just say, I am more Chosen in my self-imposed neuroses than the rest.

Which brings us to the IBS. I have just started a hashtag #JewswithIBS, because we ALL seem to have it. Mine, since the Brexit result, the election result and a couple of family things, got so bad that I finally referred myself to the doctor. There's only so long one can go without a proper meal.

Long story short: every test, every scan, every X~ray came back 'negative'. No cancer. Anywhere. So I was sent on my way with several prescriptions for tablets that might 'help'.

But. You know those 'Read all of this leaflet carefully' instructions you get inside boxes of medication. Well, I always do. Thoroughly. Because it's always interesting to get a list of ready-made symptoms to worry about. First perusal knocked out Medication 1 that advised not to take it if you had no appetite and were losing weight.

This left Medication 2, which I started taking regularly, checking the warning list of adverse reaction carefully. And guess what ~ within a week, I was 'developing' symptoms: tingly fingers, dizziness, nausea, and a presumed difficulty operating heavy machinery.

So now I have to google every single symptom separately, in case any of them are related to the incipient cancer that the tests didn't find, but might be lurking somewhere for all I know.

As for the current Coronavirus scare ~ it's coming up fast on the outside rail. I shall be getting round to worrying about it, once I am able to operate heavy machinery again.
Sufficient unto the day is the hypochondria thereof. 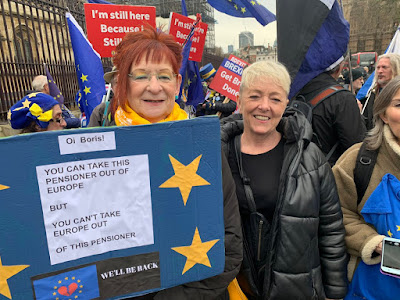 So how is it for you? Are you basking in those sunny uplands yet? Enjoying the gold dust of the Golden Age?  Celebrating your newfound status as OfBoris?

As many of you know, three years ago, as a direct result of the Referendum outcome, I applied for, and got, restored German citizenship, as my Jewish parents were forced to flee their birth country and my grandparents Alma and Rafaele were rounded up and sent to Auschwitz. You can read about it here.

What I did not realise at the time, was that the after-effects of the Holocaust were felt not only by those who survived the camps, or escaped from Nazi Europe, but can be tracked, by some process I do not comprehend, in those born later.

In combat terms, it is like having PTSD. Another description could be 'survivor guilt'. For Jews like me, born to parents who got out of the utter hell that was Nazi Germany, it manifests as a constant reminder that however safe we feel, there lurks in the shadows of our past, a time when a whole nation lost its reason, when millions of people who had done nothing more than not be 'them', were denied basic human rights and dignity, rounded up, starved, worked to death, experimented on, or shoveled into huge ovens and gassed.

And we were told, over and over, by concerned parents and relatives that the time could easily come again, if the right circumstances and the wrong leaders align.

Listen, I grew up on stories of the gradual indifference of neighbours, the relentless seeping into public consciousness, via a carefully controlled media, that certain races and religions were responsible for all society's problems, and needed to be expunged from the face of the earth. I lived with it. I still do.

But back to you. How's your journey? Did you just shrug when the media was full of photos and video clips of Union Jack-waving white guys setting fire to EU flags and singing Rule Britannia? Were you concerned when certain journalists were banned from government briefings? Does it worry you that attacks on EU citizens (and Jews) have now become so frequent, they almost don't register as shocking any more?

You should be worried.

We, who carry the horrors of the past in our DNA, are lighting our candles and stepping out into the encroaching darkness, and as we hold them up in front of us, we can clearly see shapes and contours that are both alien and strange, and yet chillingly familiar at the same time. 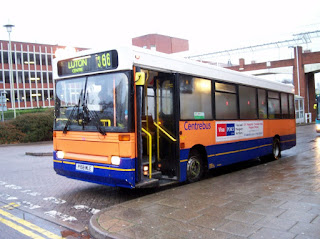