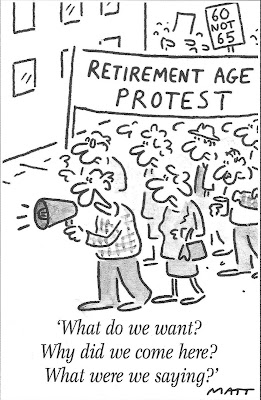 Every couple of weeks, my elderly friend Pauline and I hit the Aldi supermarket in Luton. Pauline lives in a sheltered council housing complex close to my house. I first met her when I started fighting to save our ex-allotments from being sold off by the council and over the years I have been campaigning, I've got to know her and the other residents quite well. Pauline is in her late 70's I think; some of the others are considerably older. They are a very feisty lot and there is always some feud or other taking place. Bins, parking and wind chimes feature a lot.

Pauline is an endless source of entertainment, if you don't weaken. Despite being just under five foot in height, she used to deliver motor caravans all over the UK and abroad; now she drives her little Honda Jazz in exactly the same way: fast and taking no prisoners so we arrive at Aldi with my knuckles white and my right leg stiff from imaginary braking. That's not even taking into account the swearing at other drivers, especially other drivers who don't go fast enough for her liking. 'Shouldn't be driving at her age, stupid old sod,' she grumbles, as we overtake some innocent pensioner pootling along well within the speed limit. She swears at ambulances too, mainly because she's been in enough of them in her life.

Then there's the pigeon conspiracy. I have explained many times that pigeons don't actually hang about in trees waiting for Pauline to drive by just so they can fly across her bonnet and make her jump. She disagrees. I would offer to drive, but I don't because she loves driving and it would spoil her fun so I just sit and grip the sides of the passenger seat and age silently. In between swearing at things, Pauline tells me amazing stories about growing up in the 40's and 50's - like when you went to the pictures, you could barely see the screen for all the cigarette smoke, and how she got out of bed and walked out of the hospital a couple of hours after giving birth to her fourth child because she decided she was fed up and wanted to go home.

When we get to Aldi, Pauline and I don't just shop. Pauline likes to browse, to peruse, to comment upon and critique the items on display. It takes ages and frequently we draw a crowd. My role is to get things off the top shelf for her, but if I am not fast enough, Pauline will reach up with her stick and knock the item off herself. This usually means we end up being followed round the store by some hapless member of staff who has been detailed to keep an eye on her. Funnily enough we never get told off because Pauline can do 'sweet little old lady' to industrial strength. It's an act, and we both know it is, but it never fails to work.

Pauline adores animals. She has had cats all her life - she gets them from the Cat Rescue and she also feeds the local wildlife along with any passing strays that turn up, much to the chagrin of her immediate neighbours, who have to put up with peanut shells on the communal lawn and foxes fighting in the small hours. Every afternoon, she makes sandwiches to put out, and cooks chicken pieces. Okay, it is wildly eccentric, but it was through Pauline that I learned we had badgers living in the area, and I have sat up through the night with her and watched a family of foxes with two tiny cubs enjoying her largesse.

Along with all the residents, Pauline has a quirky out-of-the box way of thinking, which is why I like her so much and why I look forward our visits to Aldi. Once I recall turning up at her flat with a very swollen foot, having fallen downstairs and twisted it. Pauline took one look, then headed straight to the ''pill cupboard'' where she keeps the enormous stash of drugs that supposedly keep her going. Rummaging around, she emerged finally with a small white box which she handed it to me.
'Here,' she said, 'these'll sort you out.'
'Thanks Pauline,' I replied, glancing at the label. 'Um ... it says Icknield Veterinary Group.'
'So?' came the laconic response. 'It cured the cat's sore leg.'