Once Upon a Nightmare 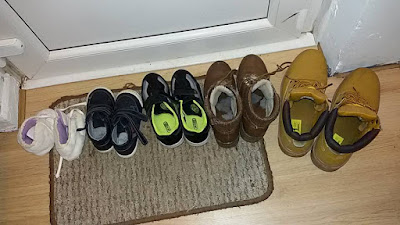 This is the story of Anna and Stefan. These are not their real names, but they are real people, and their story is all too real. Anna and Stefan come from Hungary and live in the next town to me. Anna works in the local library, which is how I met her, leading 'Baby Rhyme Time' when Little G and I used to rock up every Thursday to sing along.

Anna and Stefan arrived here twelve years ago, moved into a flat and found jobs. Stefan works for an agency in the social care industry, on low wages, visiting elderly people in their homes to help them live an independent life. Anna had a variety of jobs, but the arrival of their 2 lovely children meant that she was not in continuous work, as she took time off to care for her babies.

Neither of them ever thought about returning home outwith family visits. As Anna told me: 'Hungary has an awful despot as a prime minister.' And so their lives pottered on, the kids grew, started school, and Anna gave birth to their third child.

Then Brexit happened and their lives suddenly turned from OK to nightmare. It started with the abuse. Comments and looks if they spoke their mother tongue in the street. Stefan came home to find a group of local men waiting for him. He was threatened, called names and told to 'go back where he came from'. The abuse went on. The family went to the police. The harassment ceased. Then their very  loved cat was poisoned. The family stopped feeling safe, and started to look around for new accommodation.

Eventually, the council found them a small derelict house that had been used by druggies as a base. It was filthy, needles everywhere and nothing 'worked'. Luckily, Stefan is a practical man, and their friends all piled in to make the house habitable again. Once they were settled, they decided to apply for permanent residence. And the nightmare began all over again.

To complete the 86 page documents, Stefan needed 5 years of payslips, bank statements etc. 3 kilograms of documents. They managed to get this together, sent it off, and the Home Office promptly 'lost' some of the documents. Three months later, they were requested to resubmit everything. (This is only the first stage ~ it gets them a permanent residence card, which is compulsory for a nationality application.)

And it isn't free. It will cost Anna and Stefan £1,500 each, plus £1,000 for each child. Did I say that they both work in low-waged jobs? But even if they get the money together, that may well not be the end of their problem. There is worse. Much worse. Because Anna doesn't have 5 years continuous employment, having taken time out to be a stay at home mum, she cannot apply now with Stefan but must wait until next May.

And there is more: Stefan and Anna are not married, so Anna, in the eyes of the government, has to prove she is a family member. She may have no right to remain here. Mistakes and missteps dog the application process. As she says: 'Twelve years, & 3 children doesn't count.'  Once Stefan's application, and that of the children goes through, she could be told to leave. Who knows?

So while our MPs posture and bluff and accuse the EU (from whom WE chose to detach ourselves) of 'bullying' and 'intimidating' the UK, I offer this little (true) story to help get a sense of perspective. Anna and Stefan are just ordinary hard-working, tax-paying people. Like you. Stefan looks after elderly frail people, maybe like someone in your family. Two of their children go to a local school, like yours do. They have made their life here. And this life is being stress-tested and torn apart. Needlessly.

STOP PRESS: On their recent visit to Hungary to see family, Anna and Stefan took the decision to get married. They didn't want to, but they decided it was better for their application that they did, lest Anna's sporadic work record meant possible deportation back to Hungary and away from their three children, the youngest of whom is 18 months.

"Bloody HMRC sent my stuff back 😤😤 in Hungary they take your old passport and ID card back when you get a new one. HMRC wants my previous ones to prove its me. Called them and explained.. Funny enough this person said it should be OK and I need to resend it. I told her I'm not paying again... Ridiculous, 5 years of payslips and bank statements and they do this!!!!"

In May, I gave Anna £1k to help with the registration of ONE family member.

Sajid Javid is another prick
Sorry for the late reply, its been crazy
My Life in the UK test is on 7th July and I have been working on it every free second I have. I know its not hard but I want to make sure I pass first time.

I would love to get Farage, Boris and their gang to complete it along with the language test.
Luckily we don't have to take the language test due to the British uni degree
Oh, Home Office is just unbelievable. They called me back on time but I was at work so they left a voicemail. They gave me the phone number " I needed".

I called the number and spent 30 mins on the line by the time I figured out what was the number.. They gave me a company's number that help people find INFORMATION ON HMRC WEBSITE. I'm not joking. They thought I was an idiot (or perhaps don't speak English) who can't find information on the website.

So I sent a complaint letter to HMRC and am waiting for the reply.
Absolutely unacceptable that NO ONE at HMRC knows about the worker registration scheme that was compulsory for the new EU members. They say its finished and they don't deal with it
But it is needed for backdating your residency, even if you provide payslips
Utter nonsense and I am just so fed up with the system
I also spoke to Immigration and they said they had to provide this in the SAR request, that's what I requested 3 times now!!! They only answered once!!!
Anyway, think of me on 7th

I have just posted Stefan 's PR application, 5.3 kilos, £25 to post with parcel force for tomorrow delivery
I wrote a heartwarming covering letter about the 2 year long struggle to get a copy of his WRS (worker registration) paper and included the copies of the requests and their answers. Fingers crossed. I hope that the person processing it has a heart and common sense.

However, now I have to get two people to give my daughter references!

It never ends! I will seriously turn completely grey by the time we become British citizens