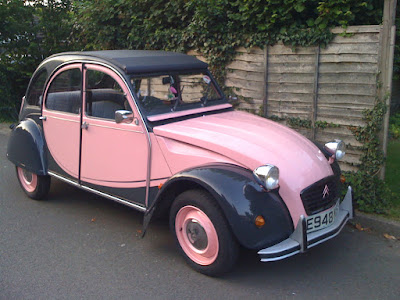 On Saturday, I bade a sad au revoir to Annie-Rose, my 1988 customised 2CV6 Charleston. Now that the other Grumpy Old Sod is retired, we can't justify or afford to run two cars, so she has been sold, and is going to France, to live out her days in the Limousin region.

My love affair with these extraordinary French beauties began when I was 15, and a youth leader had a bright yellow one. I loved the shape, the chugging 'gawd-I'm-struggling-here' noise the engine made and the way other drivers' eyes widened in fear as the little car rolled dramatically when cornering.

I never thought I'd actually own one (mainly because I didn't drive), but the serendipitous coming together of passing my test and a local mum wanting to get rid of a red and white Dolly, got me my first 2CV. She had Paris stickers and pictures of the Eiffel Tower, and I bought her outwith asking the GOS, so had to park her in a side street until I plucked up courage and told him.

It took me a week of determined effort to master the gears. If you've never driven a vintage Citroen (and they are now vintage cars) this is what the dashboard looks like: 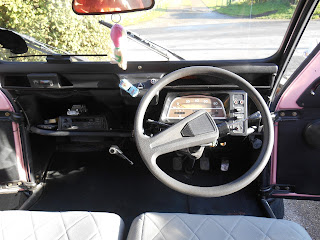 They have so many quirks and oddities (I have started one with the obligatory crank), and they are temperamental to industrial strength, but in a world of boring lookalike grey cars, they stand alone. And you can always locate them in multi-story car parks.

I am a member of 2CVGB, which meant I used to rock up to the local group every now and then. Many of them owned multiple cars, known as 'the fleet' and it was there that I bought a 1988 Plums and Custard Dolly for You Must Be Mad's 18th birthday. It had been 'moddied' by its previous owner, meaning that it could reach scary top speeds of over 90 mph. She used to take on the boy racers at traffic lights, and venture into the outside lanes of motorways, with me clinging onto the seat for dear life.

She learned to drive on it ~ we called the car Tintin, because of the Herge figure on the door, and the noise it made going uphill. It was the nearest I got to a 'fleet', and we brushed off the inevitable 'Are you going to mate them?' comments from passing locals when they were parked out front for cleaning. Eventually, when you could see the road passing under the floor mats, daughter sold Tintin, and I was back to one car again.

Annie-Rose also came from the local group too. Originally, she was light and dark grey, but in a moment of madness that I've never regretted, I had her resprayed pink. She is, I believe, unique, and we have enjoyed so many adventures over the years, turning heads and provoking stories of 2CVs owned by other people in their youth. I have rarely returned from shopping trips without finding someone admiring her, or wanting to ask questions about her.

I shall miss the quirkiness, the stubborn refusal ever to start first time in cold weather, the lack of proper heating meaning your fingers go blue in winter, waving to other 2CV drivers and the cameraderie of owning a car that ignorant people, who've never sat in one, regard as belonging properly in a circus tent. 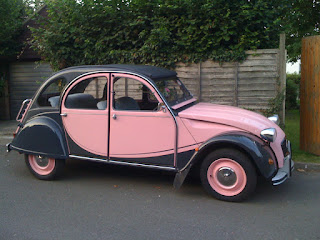 Most of all, I shall always remember, with great fondness, the many many days when my 2CVs and I have gone bombing along a country road, hood rolled right back, sunshine pouring down from a blue sky and Diana Ross blasting out of the cassette player. You can't get much closer to heaven than that!