The iPhone has landed! 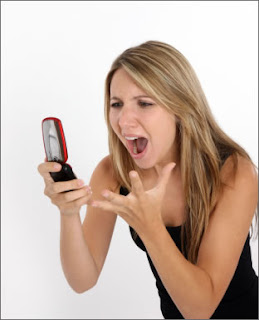 As some of you know (see previous blog if you don't) I have recently parted company with a certain media platform, represented by a small winged blue avian. Now, I am NOT the sort of individual to reacts well to be chucked off stuff (also see previous blog), so having tried various return pathways, and being told '*itter says no', it was decided (note the distancing phrase) to buy an iPhone.

It seemed a good idea when suggested. I could join the 99.9% of the population. No more lurking about in the Doro cave. Bright new horizons of communication, bathed in the sunshine of up-to-dateness beckoned. I was seduced. My only stipulation was that the new phone had to be RED.

And it arrived. And it was red. And so the nightmare began. Going from the dumbPhone to this phone was like landing on a new planet without a Lonely Planet travel guide. In the past few days I have reached levels of incompetence so low you couldn't limbo under them.

1. I thought ALL these devices were called iPhones. Yup. Only was abused of this when I met a friend for coffee and was told that her phone was a Samsung.

2. You know that thing where the optician says: 'So, what's the lowest line you can read on the screen?' and your brain goes: 'What line?' That. They don't make these devices for the myopic, do they?

3. It doesn't like my cold finger (if you wish to sing 'Cold Finger' at this point, please don't).

4. Autocorrect. The typist's worst enema. I bought a lovely jumper for Small in the sale, took a picture and sent it to You Must Be Mad in New York. The jumper was by Boden. NOT BIDEN - OK???

5. I have lost 25.8k lovely followers by being chucked off *witter. Given my lack of competence, I will probably never get them all back.

But. Rome wasn't burned in a day. And in 3 weeks, Little G (and Small) are coming to the UK for a visit, so I shall pick her brain, because even an 8 year old has to be more savvy than I am right now. Meanwhile it's a case of onward through the fog. Or  'frog' as autocorreect would probably say.