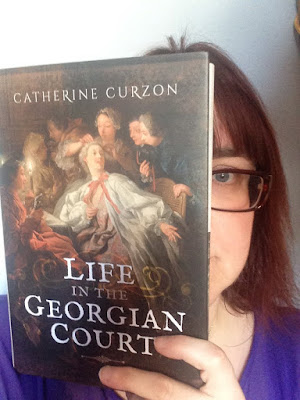 Catherine Curzon, alias @MadameGilflurte, Glorious Georgian ginbag, gossip and gadabout; professional purveyor of 18th century royal tales is no stranger to the PINK SOFA. Indeed, it is still recovering its equilibrium from her last raddled visit. However, as she has a new book out, the Sofa has dusted itself down and is delighted to host her, and any alcoholic beverages she may have about her person, once again.

''When gadding through the annals of royal history for Life in the Georgian Court one thing I discovered was that things were anything but plain sailing for our 18th century monarchs. One lady who learned this to her cost was Maria Isabel, Queen of Spain, a woman who was just 21 years old when childbirth with a grisly surgical twist claimed her life.

Maria Isabel was born an Infanta of Portugal, daughter of John VI of Portugal and his wife, Carlota Joaquina of Spain. They didn’t look for for her arranged marriage and the young last was betrothed to her maternal uncle, Ferdinand VII. Family ties be damned; he needed an heir and Maria Isabel was the ideal candidate to provide one.

The royal wedding took place on 29th September 1816, with the nineteen year old bride married to her thirty two year old uncle and set for a life in Spain. Surprisingly given how so many royal weddings went, their marriage actually got off to a happy start. Imagine then the celebrations when, just a few months after the knot was tied, news reached the respective royal families that their longed-for heir was finally on the way. Things were indeed rosy in Spain!

Sadly the happiness of the couple was short-lived and though Maria Isabel delivered a daughter, María Luisa Isabel, in August 1817, the little girl lived barely six months before her premature death plunged her bereft parents into mourning. Once again the court waited with baited breath for announcement of a pregnancy and once again a pregnancy was duly announced but, sadly, once again the event was not destined to be a happy one. 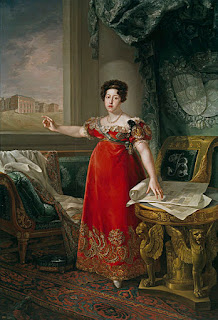 Maria Isabel went into labour in December 1818. For long, agonising hours she tried without success to deliver a stillborn, breeched baby until her strength deserted her. The prolonged seizures Maria Isabel suffered during the delivery left her in a coma so deep that the royal physicians believed she was dead. They immediately began to cut into the apparent corpse of the queen, intending to remove her stillborn daughter. Horrifyingly, Maria Isabel was not dead, though she soon would be.

With horror the physicians started back as the supposedly dead woman gave a cry of agony at the touch of their blades, the newly-made surgical wound in her abdomen already bleeding profusely.

So comprehensive were the queen’s injuries from both the difficult birth and the surgery that followed that she had no hope of survival. She died that same day, aged just twenty one. Her bereft husband mourned his wife deeply and built the Museo del Prado in honour of her dedication to art and antiquity, a monumental achievement that stands to this day.''

Catherine Curzon is a royal historian and blogs on all matters 18th century at A Covent Garden Gilflurt's Guide to Life.

Her work has featured by publications including BBC History Extra, All About History, History of Royals, Explore History and Jane Austen’s Regency World. She has also provided additional material for the sell-out theatrical show, An Evening with Jane Austen, will she will introduce at the Royal Pavilion, Brighton, in September (tickets are available here).

Catherine holds a Master’s degree in Film and when not dodging the furies of the guillotine, she lives in Yorkshire atop a ludicrously steep hill.

Her book, Life in the Georgian Court, is available now from Amazon UK, Amazon US, Book Depository and all good bookshops!


Life in the Georgian Court 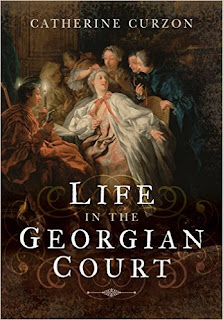 As the glittering Hanoverian court gives birth to the British Georgian era, a golden age of royalty dawns in Europe. Houses rise and fall, births, marriages and scandals change the course of history and in France, Revolution stalks the land.

Peep behind the shutters of the opulent court of the doomed Bourbons, the absolutist powerhouse of Romanov Russia and the epoch-defining family whose kings gave their name to the era, the House of Hanover.

Behind the pomp and ceremony were men and women born into worlds of immense privilege, yet beneath the powdered wigs and robes of state were real people living lives of romance, tragedy, intrigue and eccentricity. Take a journey into the private lives of very public figures and learn of arranged marriages that turned to love or hate and scandals that rocked polite society.

Here the former wife of a king spends three decades in lonely captivity, Prinny makes scandalous eyes at the toast of the London stage and Marie Antoinette begins her last, terrible journey through Paris as her son sits alone in a forgotten prison cell.


Life in the Georgian Court is a privileged peek into the glamorous, tragic and iconic courts of the Georgian world, where even a king could take nothing for granted.