On Your Bike, Mate! 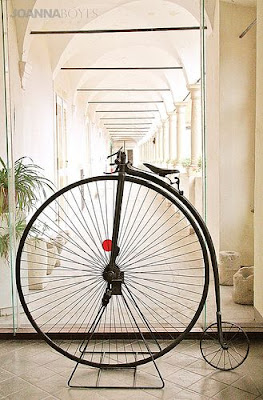 Much rejoicing at Hedges Towers this week: BH has finally been offered a job. As some of you know, his contract was terminated at his previous place of employment at the end of November as he was ''too expensive''. Subtext: too old and too expensive.

Even though he has turned his hand to a variety of jobs since graduating from the Royal College of Music with a degree that fitted him for nothing other than singing for his supper, Bh has never been out of work. Various incarnations have involved a barman, a tax collector (mentioned before the sinners in the Bible - just saying) and driving for Smiths crisps, where he was offered refreshment at every pub on the route and caused some damage in carparks as a result.

And the lack of employment went on. And on. Every day, the inbox filled up with shedloads of prospective jobs. Every day he put in for shedloads of jobs. And nobody responded. It appears that courtesy lies bleeding in some dark corner. I was reminded of the number of blogs written by despairing writers who couldn't get an agent/publisher to reply to them.

And the pain went on. And on. Other career paths were briefly considered: bus driving, working at B&Q - though as BH's DIY skills run to 'avoid at all costs', I'm not sure how much of an asset he'd be. And then five months later, a breakthrough and a job offer. He starts after the May Bank Holiday.

The inbox is now empty. Jobsearch Alert and its various incarnations have been kicked into the long grass. But the time has not been wasted. BH has been able to help me look after Little G, and they have built a lovely relationship on the back of it. He has re-edited all my Victorian books, and formatted and uploaded the YA one. He has now copy-edited the new book Murder & Mayhem. He has proofread a book for a friend. Skills he can use in the coming years when he leaves this job.

Most of all we have had a short pre-retirement run and discovered that on the whole, we can live reasonably amicably with each other. Free bus passes helped. So, ex malo bonum, as St Augustine wrote. Not sure what his employment record was ...