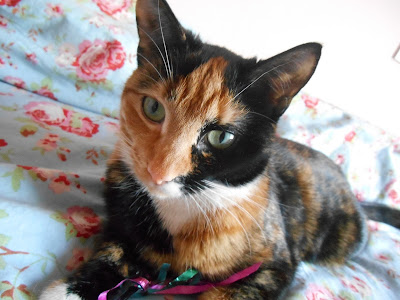 Every now and then Hedges Towers is invaded by mice. They come in from the cold, like in a John le Carre novel. Unlike in a John le Carre novel, they then find themselves face to face with a small tortoiseshell cat with a rodent fixation. They do not survive long. Unless I get out of bed at 3.35 in the morning and rescue them. Or as the cat thinks: join in the fun, but then selfishly take the small furry toy away.

I tracked their current invasion to under the kitchen sink. There is a square hole where the water pipes go out. After the last invasion I'd blocked it up, but fitting a new outside tap meant it had been unblocked. Re-blocked and applied peppermint oil. Cat then spent two nights staring fixedly at the cupboard door, like a replica of that old HMV advert with a small dog and a wind-up gramophone - but  this time with a cat and a cupboard.

Sadly, misfortunes like buses always arrive in pairs. I now discover that I must expend a shedload of money on new glasses.This is because our nice local optician told me on Wednesday that my glasses had basically 'had it' - I think she used some technical word, but the bottom line is, they can't bend them back into shape any more without the whole frame breaking apart. And the little nose thingies have split and cannot be replaced.

The frames I like (the ones where you only have actual bits at the sides, I refuse to channel Irene Apfel) cost over £350 - I have an unerring knack of picking out the most expensive stuff. And the lenses - don't go there. Trouble is, no glasses, no life. Currently we are scrabbling around down the back of the sofa and tipping out the penny jar.

So, if anybody with a mouse problem wants to hire a small tortoiseshell cat - completely unreasonable rates, but mouse problem pretty well guaranteed to be solved, please apply. Elderly myopic writer needs new glasses to write blockbuster to pay for new glasses.
Posted by Carol Hedges at 00:01