NEW! Read All About it! 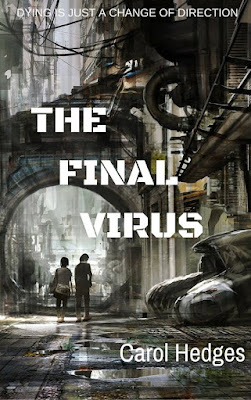 Before I started writing the Victorian Detective Series - which wasn't ever meant to be a series but that's another story, I wrote modern stories, teenage and YA fiction. I've decided to go back to writing some modern stuff, and run it alongside the historical novels, to give all you lovely readers who aren't too keen on historical novels something else to enjoy (I hope).

The Final Virus is a 'long novella' (46 thousand words) and will shortly be self-published by Little G Books on Amazon as an ebook. What is it? Well, it could be YA Urban: the two main protagonists are seventeen and live in a city. It could equally well be Sci-Fi: it is set in a future world run by a computer programme. It could be Fantasy: the world I have set it in is not like the world today.

It could be an extended political allegory like 1984: the scenarios of ruthless governmental control posited are all nascent in our own time. It could be a Romance: Will and Amber's relationship develops over the course of the book. It could be Dystopic: the universe is on the brink of catastrophe.
You will have to decide for yourselves what it is if you choose to read it .... and it is coming soon.
Meanwhile, here are the main characters, as we meet them in the first two chapters:
Will
''The summer afternoon was fading fast. The sun was already sinking westward into a pink and golden sky. A little breeze cooled Will's face. He pushed back a lock of sun-bleached hair, and wiped his damp forehead with a tanned forearm. His shoulder muscles were aching again. For a moment he squinted up at the sky, his blue eyes remote and thoughtful. Then he attached the bucket to the makeshift rope pulley.
‘Haul away,’ he commanded. Sam pulled up the bucket, tipped the earth out and sent it back down. It was better with Sam helping, Will thought. Before his arrival, he had to shift the earth himself.
‘Look, I know it's a stupid question,' Sam began.
‘Go on.’
‘Why exactly are you doing this?’
Will dropped a spadeful of earth into the bucket. ‘Geography project,’ he said abruptly. He didn’t look up. He dug the spade in the earth again, shovelled some more into the bucket.
‘Geography project?’ Sam frowned. ‘We gave that in last week.’
‘Biology, then.’
‘Respiration in mammals?’
‘Yeah, that.’
‘Respiration,’ Sam repeated the words slowly and emphatically, ‘in .... mammals. You don’t have to dig a hole. Specially a big one.’
Will stopped digging, and looked around him. Sam was right. Dead right. It was a big hole, as holes went. And as holes went, it was going well. The hole is always equal to the sum of its parts, he thought. Some of its parts were boredom, anger and frustration. Nothing to do, nowhere to go. The not-allowed outness was getting to him big time. The hole, which he'd started some time ago to get soil samples for a school experiment, had become an outlet for his pent-up feelings. A way of two-fingering the system: if he couldn’t go out, he would go down. Nobody could stop him doing that. Could they?
‘Mate, you are crazy, you know that,’ Sam shook his head sadly.
‘Maybe ...’
‘What’ll your mum say when she sees this?’
‘Nothing,’ Will resumed digging, ‘because she won’t see it.’
Not in a million years, he thought. She never came out into the garden. Not since his dad had gone. He’d been the gardener. And the rest. Always pottering around after work. Therapy, he'd called it, getting in touch with his roots. His mum had little interest in the garden then. None whatsoever now.
That was the other reason for digging the hole: the great gaping void in his heart that couldn’t be put into words. A sadness so vast and deep that the only thing he could do to block it out was exhaust himself. When it first hit him, the pain of loss, he’d gone running. He ran miles, head down, his breath ripping out in rags, feet pounding the unforgiving streets. Until the night he was picked up by the police at two in the morning running round the perimeter fence outside his dad’s work. Now he was grounded. Temporarily. So the only way to tire himself out was to dig. Maybe it was stupid. Maybe Sam was right. But at least he slept nights.''

Amber
''Amber. Am-buh. It was a stupid name, she thought. Why on earth had they given her such a stupid name? Amber sighed. As if she didn’t know, she thought. As if they hadn’t told her. Time after time after time until she could repeat it like a mantra:
It is the name of a precious stone (“it is very beautiful.”)
It has magical powers (“it releases negative energy.”)
It is very rare and expensive (“we spent months finding the right clinic.”)
Amber.
Chosen child.
Miracle of genetic engineering
Tuesdays, Amber thought to herself. She could never quite get the hang of Tuesdays. This Tuesday followed the same pattern as the others. She woke at six after another nightmare-ridden sleep. It was the one about the world coming to an end and the four horsemen again. This time it had been so real that when she opened her eyes, she could still hear the drumming of hooves, still see the colours of the four riders; so clear that she could hear the sounds of the battle, the high-pitched screams of the dying.
Amber had woken suddenly. For a few seconds she had lain, dislocated, in the pale primrose light of dawn. Her heart beat wildly and fear held her in its icy grip. It was always the same after waking from this one: a deep terror, a feeling that the world was ending around her and that she could do nothing to prevent it. Then she saw the familiar outlines of her bedroom. She had rolled onto her back, arms folded behind her head, letting the horrors of the night fade away.
Amber left it until the very last minute before she got up, showered and dressed. She shrugged into her clothes, which were the same ones she’d worn the day before. She ran a brush a couple of times through her long black hair, which she always left loose and hanging down her back. The other girls in her class were currently into braiding every tiny strand of hair, before decorating it with ‘natural found objects’, feathers or flowers or tiny stones with holes, but Amber had neither the time or the inclination to do her hair like everyone else.
Nor was she bothered about what she wore. Any old top and trousers sufficed. Amber went downstairs. She got her own breakfast. Her parents left for work early. She would get her own tea too. Probably she’d be in bed long before they arrived home. It was lonely being chosen.''

The cover has been designed by Michael Lindley (@fruitbatwalton). The editing is by Mr Detail. There may be a sequel.