WHSmith Does Not Stock My Books 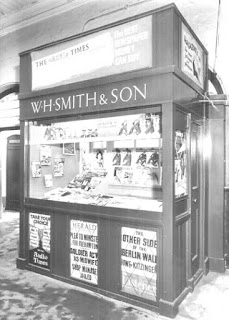 A fellow writer posits that they see similarities between Romance and Crime fiction. Not sure. At least, there may be some similarities in content (as in: ''She was struck by a piercing glance from his dark brown eyes ..'' etc). But we are totally different animals in the writing room. Yes, indeedy. Writers of Romantic fiction compose with a red rose tucked behind their left ear, and a big box of Black Magic on the desk beside them. Bluebirds sing outside their window, and small fauns gambol on the green lawns. Sometimes a white horse, ridden by a dashing male figure in breeches and a wet white shirt slashed to the waist, gallops by in the lane below.

By contrast, writers of crime fiction crouch menacingly over their keyboards, a kitchen knife gripped between their clenched teeth, ready to stab at any dark hidden depths that might float to the surface during the writing process. They write at night, furtively glancing over their shoulders every now and then, their ears peeled for footsteps coming slowly up the creaky wooden stairs. I know this, gentle blog reader, for I am such a writer. That is also why the highest award for a crime novel is in the shape of a dagger, while the equivalent prize for the best Romantic book ... isn't.

I hope we've got that sorted, though I doubt it. And so to the subject of this blog. WHSmith, bastion of pens, pencils, sticky notes and books, do not stock any of my Victorian Crime novels. I have tried asking them to, but they claim I do not exist. I do not exist because I am not on their supplier list. I am not on their supplier list because they refuse to ask for me to be added, despite numerous people locally trying unsuccessfully to order my books from them. Go figure.

It is all part and parcel of The Great Bookshop Ripoff. All bookshops demand a big discount from publishers. They then add the markup and pocket the difference. No exception is made for self/small publishers, who cannot run on such negative profit margins. This is why Amazon et al flourish, and all the whining from bookshops about poverty is purely their own fault. They could set up special deals and discounts if they wanted. Plenty of other retail outlets in different sectors do. Also big publishers PAY for table space and window space, which the rest of the smaller publishing world can't.

It is a ripoff. Both for authors struggling to get their work known to a wider reading public, and to readers who are being denied access to some very fine writers. What saddens me, as a writer of Victorian fiction, is that WHSmith started trading as a newspaper distributor, book seller and lending library in Victorian times. The first station bookstall opened in 1848, at Euston Station. They even score a mention in the 4th book. Their loss. And yours.
Posted by Carol Hedges at 23:50