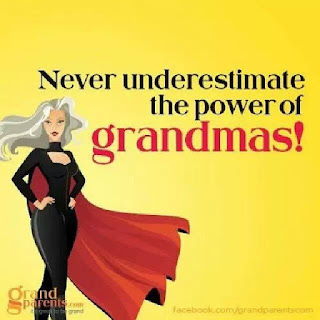 I used to think my childminding skills were on a par with that famous fictional umbrella carrying childminder: 'Practically perfect in every way'. That was before I started minding Little G. Now it is becoming more and more obvious that I am riddled with faults. Most of them are being brought to my attention by the baby, who has taken to imitating me.

''ALLO!'' she greets me, sounding like a cross between Inspector Clouseau and a South American parakeet. Personally, I wasn't aware that I said this, but apparently I do. I also wasn't aware how often I checked my watch, until Little G started doing it. Not that she has a watch. She does a very good imitation of having one though.

She is also MUCH better at giving people The Hard Stare than I am; it's really scary, I wouldn't like to be on the receiving end of it. And she raises a tiny hand in gracious acknowledgement to drivers who let us cross. I have seen people collapsing over the wheel in fits of laughter as we pass. This is how we roll.

However the ultimate humiliation came last week, when Little G was tucking into her dinner of cheese and peas (we like rhyming food) and a friend called my mobile. Having watched me for a couple of seconds, she suddenly held her spoon up to her ear, gave me a cheeky grin and started making blah-blah noises into it.

They say everyone's a critic, but my goodness don't they start young nowadays!