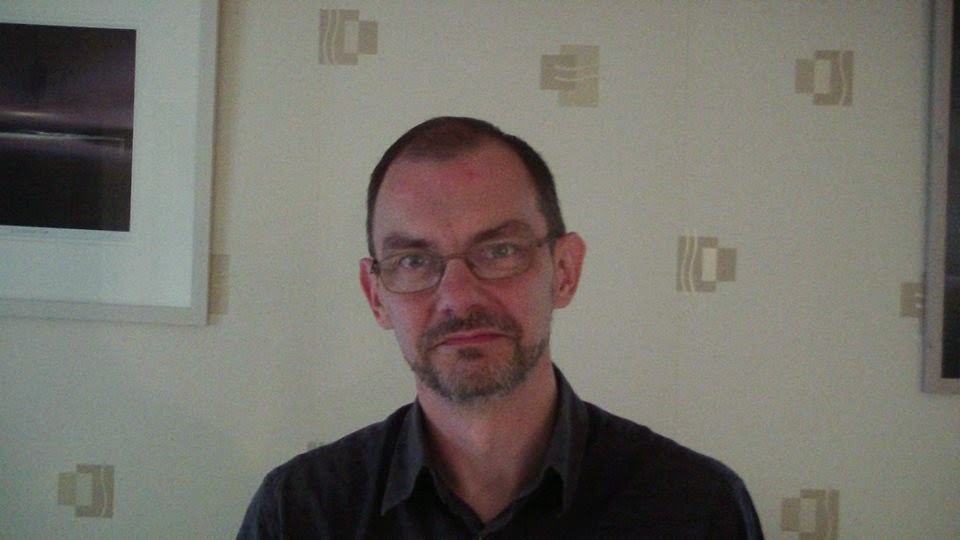 Andrew French is one of the many writers I met on Twitter. He has a wicked and wonderful sense of
humour and is totally worth following at @AFrenchAuthor. He's also very supportive of other writers, and retweets their stuff regularly. BH took Andrew's first book, Assassin's Run to Italy with him, and enjoyed it immensely. He is now reading the third one. I have just started the first one. The Pink Sofa is reading the second. Says it all.  In honour of Andrew's visit, there is freshly brewed coffee and chocolate cupcakes on the coffee table.
I asked Andrew how he got into writing...

'' I have always dabbled a bit with writing. I wrote comedy scripts when I was at school, some of which I submitted to the BBC. I always fancied the thought of writing a book but always managed to find a good reason not to. For as long as I can remember I have enjoyed reading spy stories, Ian Fleming, Len Deighton, Alistair Maclean and Frederick Forsythe being my particular favourites.

When my youngest son, Matthew was born with some medical problems, I took the decision to give up work to care for him full-time. Once he became fully well and went to school I tried unsuccessfully to resume my career. A man taking a four year sabbatical makes him less attractive to employers apparently. So, no longer being able to find a good reason why I shouldn’t, I decided to write a book

I spent most of my working life in the funeral service. I began making the tea and sweeping up for a few hours a week in the local family-run Funeral Directors. I found the work fascinating. So much so, I became a full-time funeral assistant after a few months. My progression from then on was somewhat meteoric. I qualified as a Funeral Director, then as a bereavement counsellor specialising in children’s grief. The family-run business was acquired by a large independent funeral company and I became the branch manager. Two years later I became the company’s head of operations and two years after that I was the Managing Director responsible for thirty-three funeral businesses across and .

Michael Prentiss is the hero of my spy novels. I introduced him in the first book, Assassin’s Run set in 1980. Prentiss is a sixteen year old young man attending the army’s selection centre to join the Royal Military Police. He is, however, recruited by a secret army intelligence unit known as The Detachment, or simply, ‘The Det’, for an unofficial operation in . The Det’s role is to combat the Provisional IRA in at the height of ‘The Troubles’.

Michael Prentiss is a man born out of time. He believes passionately in chivalry, not as we know the word today, but in its truest sense of courage, bravery, honour and defending the innocent whatever the cost. Prentiss is one of three main characters in my books. Michael Prentiss, Colonel Charles Mabbitt, the CO of The Det, and Richard Jordan, one of its best operators. These are my three musketeers. Although all my books have rather intricate plots with many twists and turns, they are first and foremost character driven. I take the reader on a journey, following the lives of these three men and how their experiences change them, not always for the better.

Prentiss in particular has developed into a complex and multi-faceted character. What I love most is the bond the three men develop over the six years over which the four books are set.
I spend a great deal of time research. As the books are set in the 1980’s I have to ensure that everything is ‘right’. From the cars they drive, the food they eat and the locations I put them in, I make sure that it is as factual as it possibly can be. This gives the stories a feel of authenticity and almost one of nostalgia to those reading it that can remember that period.

I felt it was important to publish both in e-book and conventional book form. As popular as the e-book has become there will always be those who prefer to read an actual book. To hold a book and turn it’s pages one by one, admiring it on a bookshelf is a pleasure in itself. No matter how advanced technologically we become I feel there will always be a place for a traditional book.

I am now a permanent stay-at-home-dad. I try and write every day when I’m not doing the washing and ironing and cleaning, you know, all the exciting things of life. If the inspiration light bulb goes on I can write for six hours straight, typing like Jessica Fletcher in the opening credits of Murder She Wrote. Other times I struggle to write a paragraph. I spend a lot of time working out the plot. The trouble with writing about terrorists is that you have to come up with a plot that’s not only feasible but believable. This means the further I get into the book the more absorbed I get with it until it pretty much takes over my every waking moment.

When I’m not writing I love watching TV. Most of my free time however is spent with my wife Alison and my youngest son, Matthew. They keep me sane. Alison is my greatest critic and best friend and Matthew just makes me laugh all the time. I’m a lucky man.''

You can download a FREE sample of Assassin's Run HERE

Thanks Andrew. Finally, someone who publishes in both formats! So, while Andrew tucks into coffee and cake, why not join him on the sofa ... there's plenty of room and ask him a question.