Bang Out Of Order! 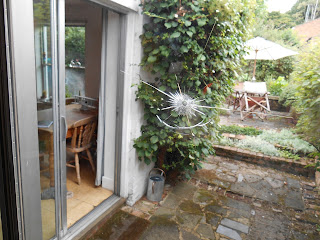 A truly shocking week at Hedges Towers. Sometimes things occur that get you thinking about the Big Stuff in Life, like: Why are we here, or Where do all the teaspoons go? Or in this case: How lucky am I?

It happened last Friday. I'd just returned from wherever I'd been. Shopping was being unpacked, kettle filled when suddenly something hit the side of the house with an enormous bang. The cat freaked out and shot upstairs. I stuck my nose out of the kitchen door - we sometimes get birds flying into the patio glass as they don't seem to distinguish between glass (finite) and sky (infinite). There was an absence of dazed bird, so I shrugged and continued getting on with things

The second bang was so loud it was terrifying and unavoidable. Rushing into the living room I spotted a hole in the very thick double glass of the window. Cracks were running from it. As if someone had fired a bullet. First thought was: that's going to be bloody expensive. Second thought: what the.....?

Close examination of the patio revealed two large ball bearings, which had clearly been fired at the house from the cycle path over the back. Funny how in a crisis, one goes into total calm: I rang the police ... rang the insurance company ... rang Beloved Husband and Dear Daughter.

And then suddenly I found myself sitting on the sofa sobbing and shaking uncontrollably as I grasped the true enormity of what had occurred and realised that, had I been standing in the line of fire, given the speed and velocity and size of the ball bearing, my chances of living to see husband, daughter, son-in-law, pets and any possible future grandchildren would have been non-existent. Delayed shock.

At which point, DD rang. The problem with having offspring who spent several years living and working in a Middle Eastern country is that they take things like this seriously. Very Seriously. 'Close the curtains,' she said. 'You need to start being more aware when you go out,' she said. 'Keep checking behind you,' she said. 'You have made a lot of enemies with your campaign,' she said. 'Have you looked under your 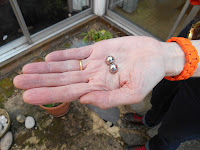 By the time you read this, a week has passed. The police are still pursuing their investigations. The insurance company has refused to pay for the replacement window without upping our premium, leaving us with a bill of nearly £300. And I have discovered that the trouble with looking behind you is that there's always a ''behind you'' where you aren't looking. I'm still here though. For now.