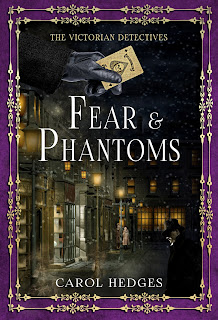 They always say you shouldn't judge a book by its cover, but that never stopped anyone.

The 'stick' has come from various publishers who've approached me to ask if I'd consider letting them take the series over ON CONDITION that they changed the covers.


The fact that you are looking at the new cover for Fear & Phantoms (recently published via Amazon in both book and ebook formats) gives you an indication of my response. Thanks but no thanks. My covers are designed by designer and friend Gina Dickinson, thus adding an extra personal dimension to them. They also have background pictures supplied by photographer friends I follow on Twitter. They are now published under the Little G imprint (my own). They are special and it is a joy to share them with you.

It always amuses me, when scrolling through Twitter, to pick out the 'I bought an off-the peg cover' books. It's so easy to do. Frequently you see the same muscled bloke or shapely young lady with accompanying pout in different settings, and wearing different clothes depending upon the genre. There seems to be a smallish pool of cover models out there. And although many of the cover suppliers SAY they do not re-use a design once you have bought and paid for it ~ they do. Believe me. Seen it with my own eyes, Guv.

"When a young man's body is discovered buried deep beneath the winter snow, Detectives Stride and Cully little realise where the discovery will take them. Is his murder a random, one-off event, or could the death be linked to the mysteriously elusive individual who has already brought down one of the City's long-standing private banks?

Mishap, misunderstanding and mystery dog their footsteps as the Scotland Yard detectives find themselves in very murky territory indeed, at times struggling to keep their heads above water in the umbrous underworld of murder and financial fraud. Can they unmask the dark brutal mastermind lurking at the centre of it all, before he strikes again?

A taut, gripping historical crime novel that lays bare the dubious practices of the Victorian banking businesses and entices the reader into the shady world of high-class gambling houses, where fortunes can be made or lost on the luck of the cards.
In the great tradition of Charles Dickens and Arthur Conan Doyle, this sharp witty series of detective novels brings back to life the murky gas-lit world of Victorian London."