Hit Me With Your Techie Stick ... Hit Me! 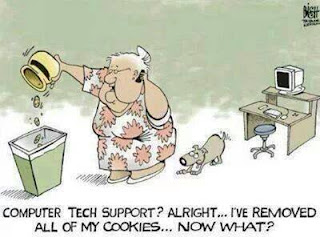 It would be fair to say that we, the Two Grumpy Old Sods have embraced modern technology, albeit at arms length. We have computers. We have a twitter account (GOS1) and an iPhone (GOS2). It would also be fair to say that when things go pear-shaped, our technical ability to sort them is so low you couldn't limbo under it.

As those of you who have nothing better to do than follow this blog know, I have now got a new state of the art small purple laptop, as my beloved e-Mac died on me five months ago, taking 13K words of the sixth Victorian Detectives book with it. The new laptop is supposed to be just for writing, and is not connected to the internet, but recently, it has started behaving oddly.

Out of the blue, it 'locked' my manuscript, offering me an alternative version to merge. Then various apps mysteriously appeared. I hadn't downloaded them (no internet connection). GOS2 accused me of various underhand dealings. I denied them. We worked out finally that my laptop must be connecting to the office desktop. Through the floorboards. A kind of internet computer dating ... only with real computers.

Weird stuff continued to dog the new laptop. I kept getting requests to update stuff. Or install stuff. Finally, the whole thing threw a mega cyber-sulk, closed down and refused to let me write altogether. After a brief altercation on the lines of 'Well you must have done something to it.'/ 'No of course I didn't,' we took it back to CurrysPCWorld, where a very nice techie person showed me exactly what I needed to do to stop it playing with the downstairs desktop:

Press the key with the little plane on it. Who knew? Not us; reading manuals is for wimps.

The very nice techie-man came from Poland. I asked him. Which means that in 12 months time, which is when I can down-grade to a non-internet package, I guess he won't be there any more. Another thing to lay at the door of this ghastly Brexit.