EU too? Reflections from EU Citizens in the UK. 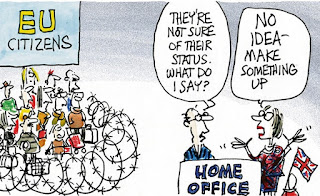 I have written several blog posts about the ongoing difficulties experienced by EU Citizens trying to live ordinary lives post-Brexit. You can read one of them here.

The following are all snippets from an EU Forum to which I belong. This is what life has become like for these families, ALL of whom are here ''legally'' (we still belong to the EU.) I have interspersed the comments with some montages of what these 'hard working families' read every day in the popular press.

'I went to a medical appointment yesterday and was asked a wide range of questions about my family, my marital status, nationality including my husband's and children, the date I came to the UK and if I naturalised. Strangely enough I have the impression that I will have to give further justifications in accessing any services. This is worrying and I just would like to know if there is an appetite in this group to campaign with all non EU migrants to combat against this disgusting immigration check policy within the NHS that has come into effect in October 23rd, yes...only 3 days ago.' 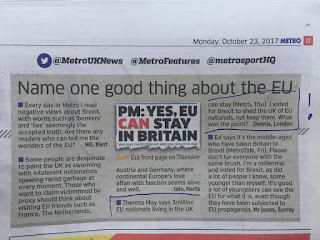 'Its not NHS staff that are often bad, but stupid govt forcing them to be immigration authority. NHS organised quite few protests against that too.'

''I have not experienced any issues or discrimination personally up until today. I wanted to buy a bottle of cider in Morrisons in Bristol and was refused. I was asked for ID to verify my age (which is fine, and in fact even a bit flattering at 36

:P ). When I presented my Estonian ID card, the staff member first said that she's not sure they can accept it. She then said that she'll go and check with her superior. I was happy with that, as I expected her to return and say that it's fine. Instead, she returned and said that "Unfortunately, they don't take these." She wasn't rude and apologised for the inconvenience but it was still really annoying. She asked if I had anything else with me, such as a driving license, and when she heard I don't, she said that she cannot sell the cider to me. I was too upset and embarrassed to want to go and talk to a manager. '' 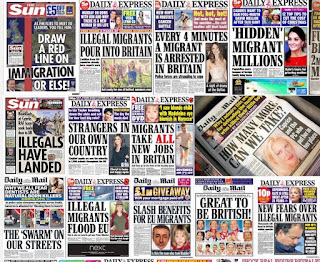 'As someone who's half Asian, half European, speaks five languages, went to bilingual schools and has had friends from all across the globe, I just never got the concept of 'foreign'.
I guess what I am trying to say is that I view this whole situation as ... disappointing, more than anything. It's also made me less intent on wanting to make plans for a future here, and I have been painting a vision of my future as dependent on where I want to go and where I feel welcome, because if the past few months have taught me anything it's to appreciate the power of just packing my bags and leaving.
I know that's an extreme view, and the optimist/realist in me pretty much doubts that I would have to leave, but I think ... that somewhere, somehow the UK has just let me down


And I think that's the saddest part about this whole current ordeal -- it's making people like me who used to admire the UK just want to leave, because the rest of the world just seems like a more welcoming place.'

' The choice of language is used to reinforce their (Government) narrative- such as before the referendum, using the terms EU citizens vs British ( therefore stripping UK citizens of their EU citizenship, then applying together EU with immigrants ( when EU citizens were not considered immigrants per se, but merely using their freedom of movement, now regularise. these words are chosen carefully, to create an effect.'

'What's with the “those who are unemployed” may be rejected from settled status? That’s all students/carers/out of work spouses Pandora box re-opened, no? Does that mean CSI will be dropped but not being in employment could get you rejected? On what basis? Age? Gender?' 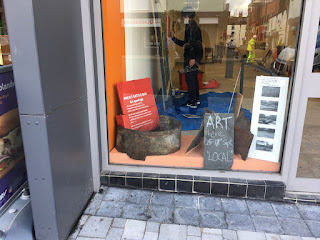 'Remainiac tripe claiming to be "art" spotted in Bolton, which voted for Brexit.'
This was posted today (20.10.2017) on Twitter from a Conservative Councillor.

'I read a report on the BBC this evening that Theresa May will say that the cost of applying for settled status will be "as low as possible". My partner is Spanish and I see no reason why he should pay a penny for his new status.Theresa May should guarantee now that no EU citizen should have this burden, no matter how small, just as benefit claimants should never have had to pay those outrageous costs for calling the Universal Credit helpline.'

'It is becoming more and more apparent that the uk and the home office in particular are meaning to create a hostile environment for all non British. I think it’s high time we drop the hierarchy of immigration and fight in solidarity for all our rights as human beings no matter where we come from.'

'People are leaving because they see the writing on the wall.

The UK is going to be poorer, and the immigration situation will not get better. Even if they grant us the same rights, you will still need settled status, and you can rest assured that they will check this everywhere (job, bank, GP etc..) you go. A lot of people came here under FOM which allowed them to live here with far less restrictions and beauracracy. With settled status they will now have to jump through hoops to work and live here. Why do that when you can go to the continent and live in another EU country without jumping through so many hoops.

Also (and this one I feel is important), the Brexit vote has shown a side to the UK that a lot of people have found very distasteful, and they do not feel comfortable living here anymore. The anti-immigration fervor is most definitely a turn off for a lot of people.'