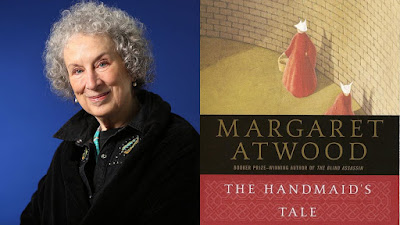 Margaret Atwood's Dystopian novel The Handmaid's Tale, written over a 2 year period from 1984-5, is based upon the 'unlikely' premise that a far-right religious extremist group overthrows the US government, suspends the constitution and forms an authoritarian regime, the Republic of Gilead, in which women are not allowed to work, read, or write and are only valued by their fertility.

At the time she was writing it, the scenario seemed utterly far-fetched. As Atwood commented recently: ''Back in 1984 the main premise seemed ~ even to me fairly outrageous. Would I be able to persuade readers that the United States had suffered a coup that had transformed an erstwhile liberal democracy into a literal-minded theocratic dictatorship?'' (New York Times Book Review)

Unlikely as her concept seemed then, the history of Gilead and the 'herstory' of Offred resonates  strongly today. I believe, personally, that we are sleepwalking towards Gilead, although we are as yet unaware that we have embarked upon the journey. My view is founded upon the way that certain rights are under threat in this country (UK) in a way they have never been before. This is how the journey is unfolding.

*  Control of Language
Without our conscious awareness, we are subtly being fed new meanings to words that alter our perception of the people to whom they apply. Take the word immigrant for instance: do you not find yourself adding 'illegal' to it? How about Benefit ~ applicant or scrounger? This demonization of certain groups in society has been validated by the government and numerous TV reality programmes, where selective cutting creates a picture of people outside mainstream society.

* Control of the Streets
In the wake of the London/Manchester attacks, how many times have we walked past men in body armour carrying guns? When did this become normal? At what point do we tacitly accept that our 'freedom' is dependant upon men with guns patrolling our streets? Men who are trained to shoot and kill.

*Control of Rights
Theresa May has made it quite clear that she is prepared to 'rip up human rights laws to fight terror'. It sounds 'strong and stable', but behind the rhetoric is a frightening prospect. Consider what human rights consist of:
Right to life
Freedom from torture
Freedom from slavery
Freedom of speech
Freedom of thought, conscience and religion
Freedom of movement

Article 1 of the Universal Declaration of Human Rights states: “All human beings are born free and equal in dignity and rights.”

Which right are you happy to be ripped up? And if one, why not two, three, or more? It is a slippery slope. Currently, we stand at the top of it looking down.

*Control of Conscience
We live in a pluralistic multi-culture, where 'citizens of the world' rub shoulders. Many diverse faiths, beliefs exist side by side. I would never question your deity (or none), but when religion and politics shake hands, it makes me uneasy. Theresa May's power-hunger decision to hold on to her job at all cost, has led her to seek support from the DUP, a strict Protestant group that holds strong views on women's rights and marriage. Is this another step on the road to Gilead? In agreeing to prop up her party in the House of Commons, what will they want in return?

*Control of Nationality
We are beginning to glimpse the forces behind Brexit: the vast sums poured into campaigns, the outright and manipulative lies peddled, the use of analytics and 'bots' to influence the outcome. The dismissal of any 'experts' speaking against the project, even in the face of overwhelming evidence that they are correct, are dismissed. We 'want our sovereignty back', we 'want to be in control of our borders'. We are continually told that we will have greater freedom post Brexit. In Gilead, Aunt Lydia spoke of 'freedom to and freedom from. In the days of anarchy it was freedom to. Now you are being given freedom from.' My question is: how can you be 'given' freedom? (see section on human rights)

None of this has happened suddenly, it has been slowly creeping into our national subconscious, aided and abetted by the popular press that peddles its faux outrage, or attacks with vicious venom, any individual or institution that it does not want us to like. As each shock event occurs, here or elsewhere, it seems that fear is used as a pretext to tighten rules and regulations, suspend laws and restrict freedoms. Anybody who speaks out is branded a traitor. 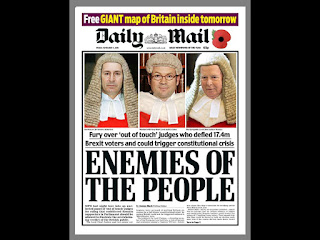 The cry 'it couldn't possibly happen here' echoes hollowly down the ages. It was said by my German Jewish grandparents as the Nuremberg Race Laws were drawn up. The belief that people would come to their senses, and reject what those in government were proposing to do, stopped them from leaving Berlin, and ended with their deportation and deaths in Auschwitz concentration camp.

As Offred, the heroine of Atwood's novel says: ''We didn't look up from our phones until it was too late.'' We need collectively to wake up, look up, and understand the current direction of travel, before we forget where we started out from.