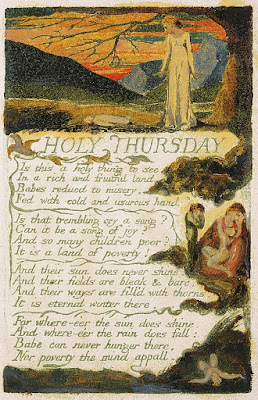 William Blake published his 'Songs of Experience' in 1794. Holy Thursday is one of the most poignant. The reference is to Ascension Day, when a service was regularly held at St Paul's Cathedral for the poor children of London's Charity Schools. Blake's verses are a bitter outcry against the hypocrisy of church and state (then closely linked), that doled out charity with 'a cold and usurous hand' and then paraded the recipients through the streets in a humiliating public spectacle.

These 'Babes', he says, do not enjoy 'sun' nor 'fields', instead their young lives are marked by 'misery', 'poverty' and 'eternal Winter'. The lexical polarity is quite deliberate. It is a bleak picture of a cruel and harsh time. Not that the Babes' lives got any better in the 19th century. Poor children were expected to contribute in some way to the family earnings from birth onwards. Small girls sold watercresses, strawberries or sulphur matches, depending upon the season. Boys risked life and limb sweeping the muck off the streets for people to cross. Babies were frequently 'lent' to elderly beggar women to make them look even more pathetic. Others sold flowers or matches on street corners, standing in the open in all weathers. Still more risked life and limb darting between carriages to sweep a path. Some children spent long lonely hours minding smaller siblings. Few could read or write.

Henry Mayhew, the great chronicler of London life recorded in his London Labour & the London Poor (1852-4), the words of  a coster-lad. His father died when he was 3 years old, leaving his mother to cope. He told Mayhew:

''Mother used to be up and out very early washing in families ~ anything for a living. We was left at home with some bread and butter for dinner. Afore she got into work, we was shocking hard up. Sometimes when we had no grub at all our stomachs used to ache with the hunger, and we would cry when we was werry far gone. She used to be at work from six in the morning till ten at night which was a long time for a child's belly to hold out again, and when it was dark we would go and lie down on the bed and try to sleep until she came home with the food. I was eight years old then.''


Sadly over two hundred years later, we still see the lives and life-chances of poor 'Babes' being trampled in the dust as their parents are treated with scorn and contempt by a government that regards them as idle wastrels. We see benefits cut, sanctions applied, help denied,

Daily there are stories of parents denying themselves food so that their kids can eat. Children arrive at school too hungry to concentrate; sometimes they don't arrive at all because they have no shoes, or uniform, or a warm coat. We see the rise of foodbanks: an utter disgrace in a 'rich & fruitful land' like ours. We read tragic reports of families being made homeless because private landlords raise their rent, and greedy profit-focused developers are reluctant to build 'social' housing. The 'free school lunches' are on the verge of being abandoned in favour of cheap breakfasts.
The cap on housing benefit and the rise of rents potentially throws numerous families onto the streets, depriving their 'Babes' of the right to stability, education and a decent family life. Thousands of children are, even as you read this, having their hopes and dreams of a happy future kicked into the nearest gutter though no fault of their own.

Someone on Twitter recently asked: How can any Government do this to innocent children? My reply: Because they aren't their children so they don't care. Blake cared. His poems, of which only seven copies were printed, were radical critiques of the rich landed fat cats in Parliament and the Church who lorded it over society and inflicted terrible damage to the lives of ordinary human beings by their selfish, greedy policies and attitudes.

The Songs of Experience were considered deeply 'seditious' and could have led to Blake's imprisonment if they'd ever been read by government officials. Nowadays, I guess he'd just be roundly mocked in the rightwing tabloid press and trolled on social media.