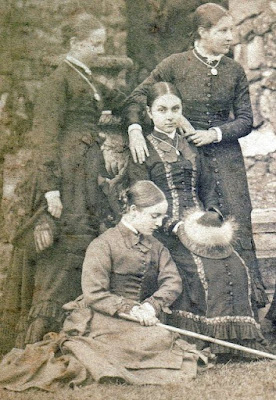 In 1971 I graduated from Westfield College, University of London with a BA (Hons) in English & Archaeology. I took it for granted that I had a right to go to university and that following my degree, I would enter the marketplace as a professional woman, equal to any man doing the same job of work.

I started researching the roles and expectations of young Victorian women for my novel Murder & Mayhem (publ this September). The story features bright 17 year old ‘Feminist’ Letitia Simpkins who desperately wants to learn more, but is denied access to further education by her authoritarian father. It made me realise how lucky I was to have been born in the mid-20th century rather than the mid-19th century.

For bright young Victorian women, the doors to further education closed at 16. Intellectual curiosity and thinking skills were considered a waste of time, given that the purpose of a woman’s life was to marry and be the mother of (many) children.

As one contemporary wrote: “Girls are to dwell in quiet homes, among a few friends; to exercise a noiseless influence, to be submissive and retiring.” (Sewell, Principles of Education).

Interestingly as far back as 1694, Mary Astell’s A Serious Proposal to the Ladies suggested a type of university education. But of course, the very fact that the proposer was female meant that the idea was not taken up or considered seriously.

Women were just thought of as physically incapable of scholarship. For a start their brains were nearly 150 grammes lighter than men’s brains. So that must indicate that their intellect was weaker. And then there was the vexed question of menstruation, which sapped the body of lifeblood.

Put those two together, and it was quite apparent that women who used their brain too much ran the risk of becoming sterile, as their wombs atrophied, thus negating their purpose in life, or even worse, producing “a puny, enfeebled and sickly race” of children.

You may laugh, or gasp in amazement, but this was a widely held medical opinion at the time. Girls were strongly advised to focus on making their homes a sphere of accomplishment, rather than striving for a higher education. And to wait patiently for some young man (who may well have had the benefit of a university education) to come calling.

That the ‘petticoat problem’ began to resolve itself was entirely due to the actions of a few determined young women who decided that rather than break down the doors, they’d pick the lock and fight for equal education for women.

In 1850 North London Collegiate School opened, followed a few years later by Cheltenham Ladies College. The key word is ‘college’ – these weren’t places to learn embroidery, a smattering of French, some maths and what to do in a thunderstorm. They were seats of learning, encouraging girls to see themselves as capable of entering university and from there, the workplace.

In 1879 London University became the first to admit women undergraduates on the same terms as men. One of the pioneering women who enabled this to happen was Constance Maynard, who in 1863 campaigned for girls to be allowed to sit the Cambridge Locals (the equivalent of GCSEs) and then the Higher Locals (A levels).

When I was at Westfield, originally founded as a women’s college, my hall of residence was called Maynard House, a fitting tribute to a Bluestocking pioneer. Without women like her, prepared to step out of the shadows and campaign for their beliefs, I would not have had the benefit of a university education, and the opportunity to have a productive and fulfilling career.

In which our heroine Letitia Simpkins discovers an unpleasant truth:

''The pleasant and instructive visits to the Regent Street Ladies’ Literary & Philosophical Society seem a distant memory. The outside world seems a distant memory. There is nothing in Letitia’s life now that she recognises. The joy of it has run out as quickly as it gathered.
Letitia pauses outside the parlour door which unusually, has been left ajar. She leans against the door jamb, bone weary and despondent. She sees her papa and Mrs Briscoe sitting side by side on the sofa. Mrs Briscoe is speaking. It takes Letitia a few seconds to realise whom she is talking about.
“Really, it is a most unfortunate situation. The girl has barely learned sufficient to equip her for a useful life. I do so sympathise with you, my dear friend. That mauvais quart d’heure in between school and marriage is always difficult.”
Her father snorts.
“It was Susan’s whim to send her to the boarding school in the first place. She thought mixing with a better class of girl would help her find a husband. As if any self-respecting man will marry her. She hardly has the looks to attract a suitor. And I cannot offer a dowry - there is the boys’ schooling to pay for, and then their university fees. They must have the best start in life.”
“I do so understand. And of course, you are quite right. But as I wrote in my little pamphlet: How to be Happy Though Unmarried, there are many things a girl can do. The poor are always with us, so there is plenty of charity work.
“And there is no household task that any girl should deem beneath her position to perform, as I have frequently reminded Letitia. All these useful occupations will enable her to pass her days in dignified tranquillity”
Letitia’s eyes brim with tears. She does not know what hurts more, to hear her own father admit her lack of beauty, or to understand that he does not care what happens to her in the future. However Mrs Briscoe’s next remark causes her to breathe in sharply.
“Has she had any more letters from those vile Women’s Rights creatures?”
“Not for a while.”
“I am so glad you managed to intercept them, my dear. A parent must be vigilant at all times. One tiny slip, and a girl’s reputation is gone, never to return.”
“I have locked them away safely, never fear. And I have instructed Mary to make sure the post in and out of the house is always placed directly upon my desk.”
Mrs Briscoe leans forward, placing her hand on his.
“It is no more than your duty as a loving caring father. And now that you are a widower - though hopefully not for too long, you must be even more vigilant on your daughter’s behalf.
“A young girl’s true sphere is in the home, and there she shines brightly. Skill with her needle is the only accomplishment she needs.” ''
(Murder & Mayhem tbp.)