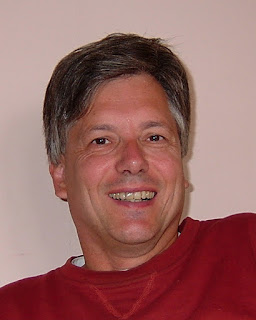 Writer and blogger Tom Williams and I met via a long comment he left on one of my blogs. Tom writes historical fiction and claims to dislike Twitter. It has been my fixed purpose to disabuse him of this dislike ever since. Tom used to have a pet ferret, but it has now passed on to the great Trouser Leg in the sky.

When not writing his superb books (set during the Napoleonic Wars and featuring British Agent James Burke), Tom and his wife like to go Tango dancing ... something that has really caught the PINK SOFA'S fancy and it has been practicing its swivels and turns in preparation for his visit.
I asked Tom some questions about himself.


How did you get into writing historical fiction?

I was in Sarawak, in Borneo, and I saw the museum exhibit about the Brooke Rajahs. I was so fascinated that when I came back to England I spent a lot of time researching the life of James Brooke. Eventually I decided that it could be the basis of a novel. (That was hardly an original thought – there have been loads of other books about him.)

How/where do you research your material?

Research used to mean weeks spent in libraries. Thanks to the Internet, I can do a lot of my research from home these days. When I can, I like to visit the places that things happened. The most fun I had was researching Burke in the Land of Silver. I spent a long time poking around the back streets of Buenos Aires and then went riding with the gauchos on an estancia. Finally, because Burke crosses the Andes as the snows are starting, I tried to ride across in the snow. It turns out that's not really possible – but we got a long way. I'm hoping to go and do it in summer next year.

How long does each book take to write ...how many drafts do you do?

Each one takes about a year. I don't do a redraft from beginning to end. Thanks to the wonders of word processing you can polish and edit and amend all the time. Some things end up in the finished novel pretty well unchanged from the first time I wrote them – others have been written and rewritten until my fingers bleed.

Why don't you self publish?

I enjoy writing. I used to work in magazine publishing and I gave it up to write. If I wanted to work in publishing, I'd have kept my job and made a lot more money. As it is, Accent Press relieve me of the responsibility of editing and formatting and basically getting the book out there, and they give me a lot of support in marketing. Writing can be quite lonely and having a supportive publisher makes a difference.

What's the best/worst thing about being a writer?

I've always wanted to write and now I can afford to indulge myself. It just gives me a lot of pleasure.

Absolutely definitely the worst thing is that increasingly, in order for people to find your books, you have to sell yourself. Like a lot of authors, I'm quite reclusive by nature and the whole business of "the author as brand" is not something I'm comfortable with. Still, I'm here answering your questions, so I suppose it's getting easier.

Name a book that changed your life

Jerusalem the Golden by Margaret Drabble

If you could go back in time, where would you go?

Realistically, anyone would die pretty quickly if set down outside their own time period. I can ride (after a fashion), shoot (ditto), I can handle a bow and I know which end of an epee is the pointy one. So I could probably survive an hour or two from the 17th century until the start of the 20th. I really struggle with the 21st century.

What's your most treasured possession?

Anything that connects me to the internet.

You are a great fan of Tango. How did you get into dancing? What do you enjoy about it?

When I was a child I wanted to do ballet, but this was in the north of England in the days before Billy Elliot and my parents dismissed the idea out of hand. God knows why I wanted to – I'd have been terrible at it. Still, there's nothing like being told you can't do something to motivate you. Eventually I took up ice dancing as a socially acceptable alternative and then a friend introduced me to tango and I’ve been dancing it ever since.

What is the one thing that would improve the quality of your life?

Don't tell anyone I said so, but my life is pretty neat as it is.

What keeps you awake at night?

Usually nothing does, but lately I've been worrying about ways to get more people reading my books about James Burke. Most people who do, really rather like them – it's just a case of doing things like this to get them better known.

How do you want to be remembered?

I’d like my family to remember me (which, let's face it, they’re going to) and it would be nice if the books carried on being read for a while, but otherwise I really don't care. People worry too much about what others will think of them when they're dead. I'll be dead – it’s not really going to matter to me.

What would you like to say to your younger self..if you could meet him now?

It doesn't matter – I wouldn't listen.

What advice would you give a writer starting out on their first novel?

If you have to do this stupid thing, do it properly. Write something that's as good as it can be, and then rewrite it. Get your friends to look at it, and then write it again. And bear in mind that you have more chance of winning the lottery than ever reaching the bestseller lists – pretty well regardless of how good you are.

Writing really is a mug's game. Yes, I do enjoy it, but, like most writers, I do it because I have to. It's a sort of mental illness. If this is true of you, welcome to the club. If not, do yourself a favour and take up something saner – like freefall parachuting, or marathon running, or poking sticks in your eyes.

Links are to KIndle, but all the books are available in paperback as well.

If this is all too much, why not link to my Amazon author page?