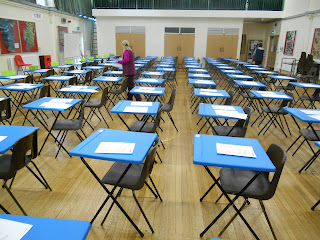 Whenever people learn that I invigilate GCSE/A Level exams at a local secondary school, they always respond with: 'Oh, exams were much easier in my day'. Which I translate as: 'the mists of time have blurred my memory of what it was really like.'

OK, some subjects - Modern Foreign Languages and Music for example, are easier, but the peripherals and pressures today are vastly different. Now the cohort of 2015 have to obtain B grades in Maths, Science and English just to get into Sixth Form, which would exclude me for a start as I only got five O Levels, none of them Maths (failed twice) and none of them Science (kicked out for disruptive behaviour).

In 1966, eight subjects was considered the maximum a student could handle. Now, many Year 11s take twelve or more subjects, meaning that they can be sitting as many as four exams in a single day. It's a logistical nightmare. But if you choose to turn your back on education and leave school at 16, there are very few apprenticeships or decent jobs waiting for you.

Even if you decide to stay on to do A Levels, the chances are you will have to pass with top grades to be considered by any decent university. Straight As and A* at GCSE and the same at A Level or you won't get that place you want on the course you have chosen. So no way would I, with my rubbish O Levels be offered an unconditional place to read English & Archaeology at London University, as I was in 1968. 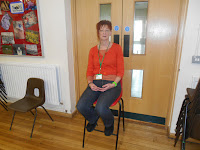 And then after your three years' study, you leave with a debt of £50,000 and no prospect of a well paid job. No wonder every secondary school I know now holds therapy groups for stressed and depressed students. And incidents of self-harming and eating disorders have rocketed.

I was not a 'successful' student measured by today's standards. I wasn't gregarious, I was no teacher's favourite. I spent a lot of time not being there. My interest lay in other areas .... I read voraciously, wrote copiously and thought exams and school were a waste of my time.Today's hot-house system would have consigned me to to life's rubbish heap.

My fear is that it's probably doing just this to many talented teenagers who don't fit into the mould and can't handle the current one-size-fits-all educational treadmill. Easier exams? Possibly. But a far more uncertain future.