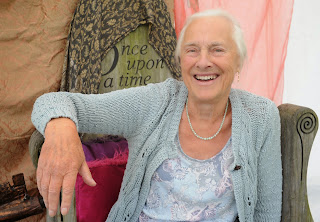 There are some people in life to whom the term 'grande dame' seems applicable. Beryl is one of those people. She is a novelist, a great grandmother, and at 84 has just written her 25th book. The PINK SOFA is so excited to welcome her that is has been polishing its legs and hoovering its crevices for days. Beryl's life story is not an easy one (see below) so it is all credit to her that she has emerged as the talented, supportive wonderful person that she has. Over to you, Beryl:

''Well here I am prepped, pampered, pink sofa’d and feeling very spoilt. I only wish I could tell you the sort of story I’m fairly sure you’ll be expecting, but I’m afraid I can’t because my writing career has been decidedly a-typical.

This is a quite a long story and very unlikely so I hope you’re sitting comfortably. When it’s done you’re at perfect liberty to yell ‘Liar, liar, pants on fire!’ Even I find it hard to believe and I know it’s true.

I’ve been writing since 1938 when I was seven – and no, that’s not the pants-on-fire moment – I know that’s how young I was because I was writing ‘poetry’, which I dated, and keeping a secret diary. It had to be secret so that my mother didn’t see it and it was very necessary to me, like a comfort blanket.

My mother, you see, was a difficult woman, so full of jealousy, anger and hatred that she had to off-load it whenever she could. She beat the dog, belittled my father until he lost his temper and hit her, drowned the kittens and caned me. The caning would have been bad enough but she also forbade me to cry or to tell anyone. So I went somewhere quiet and wrote about it instead. It gave me a bit of instant comfort and a gradual taste for shaping sentences and finding the accurate word. Soon I was addicted to the happy art of writing and story-telling. By the time I was nine I was hooked, writing a more elaborate diary and spooking my cousin with ghost stories.

I grew up, went to college, got married to my darling whom I met by accident when I was just sixteen, had children, embarked on a teaching career, which I enjoyed a lot, and went on writing and telling stories. But I didn’t offer anything for publication, naturally, because I could still hear my mother’s voice telling me I wasn’t any good and wouldn’t amount to a row of beans. So I destroyed everything I wrote, poems, plays, stories, the lot. Seems like a terrible waste to me now but that’s what I did.

Then in 1956 I joined the National Childbirth Trust and, although I didn’t know it at the time, that was a turning point. I became one of its gurus, teaching more and more women how to cope with period pain and going to local groups giving lectures about it, demonstrating relaxation, dry land swimming and the pelvic rock, which is belly dancing by another name. After one hilarious meeting with a large group in Leeds, the secretary phoned to ask whether I could write them a leaflet detailing all the things I’d been talking about. ‘We know it was good,’ she said, ‘but you went at a hundred miles an hour and it was so funny and now we can’t remember half of it.’ I said I would but then discovered I had so much information that what I wrote turned out to be a book. At which point, greatly daring and urged on by friends in the Trust, I sent it to Good Housekeeping Magazine as they were running a series of articles on the subject, asking whether it would be any use to them. They passed it on to their publishing arm, which was Ebury Press and, to my considerable surprise, Ebury published it.

At this point in the story things get incredible. Because it had been so easy to write a book, I thought I’d try a novel, just for the hell of it and to see if I could do it. Three years later it was written. (I was slow in those days because I was still teaching)  By then ‘Lifting the Curse’ was out in hardback and Ebury took it to the Frankfurt Book Fair and displayed it there. By amazing luck, the next stall along was run by a man called Darley Anderson, who published self-help books but really wanted to be an agent. He said he would like to take ‘The Curse’ as a paperback and asked my editor if I’d written anything else. When he heard about the novel he asked for my phone number.

He rang me the next day and asked if he could have the paperback rights to ‘Lifting the Curse’. I said ‘Yes, of course’ feeling rather chuffed. Then he asked if he could see the novel. You won’t believe this but I said no. I was still living the dream and to send him the manuscript left me open to being told it wasn’t any good and being brought down to earth. He didn’t push me but said he would phone again and see if he could change my mind. He’s a Yorkshireman and determined. He phoned at regular intervals for three months and in the end I gave in and took it up to his club, with a covering note to ask him to ring and tell me that he’d got it safely because it was my only copy. Imagine the sauce of that!

He phoned the same evening and what he said blew my mind. He’d read the first three chapters. It was going to be a best seller and could he be my agent. He was and it was. It was the making of us both.  All together now. ‘Liar, liar, pants on fire!’

After a start like that I left teaching and wrote a novel a year. My paperback sales passed the million mark with my twelfth book. Now I’m finishing book 25, which follows the life and times of a girl who was born in 1897 and sent out to work a skivvy in a big house miles away from her parents, when she was 12 as so many country girls were.

Book 24, on the other hand, came out on March 31st this year and is a very different kind of story. I have to turn in a different direction with each new book, because I’ve got a low boredom threshold. This one is a modern story about a young woman called Francesca who has lived very unsatisfactorily and uncomfortably with a loud mouthed bully. Until one clear-sighted day when she sees a mermaid, swimming freely in the North Sea. The sight inspires her to leave her lover and start a life of her own. It turns out to be more difficult and complicated than she’d imagined. You can hear the first chapter on my website if you would like a taste of it. www.berylkingston.co.uk  and find it on Amazon and Kindle

I am proud of the fact that I was in Tooting for the first four months of the blitz, and only left it to be evacuated for the second time when our road was bombed and our house was uninhabitable. I spent the middle part of the war in Harpenden. (hence my friendship with Carol) and returned to live in London again at the end of the war at the time of the V2’s, this time without my family. It was a formative experience. As was meeting my darling. Ah the stories we gather in our lives!

Because of being evacuated twice, I went to 10 different schools. I ended up at Streatham Secondary School, an LCC grammar run on the Dalton system, which offered a few lessons as sparking points and then required pupils to be responsible for their own learning, either in study rooms with their teachers on hand to help and advise, or on their own in the library or the school hall. It suited me to a T and was another formative experience. Then to King’s College London, where I read English and enjoyed myself a lot, but wasn’t particularly distinguished, having other things on my mind by then.

I taught in a variety of school between 1952 and 1985 and in the two schools where I was head of the English department, I deliberately covered the full range of age and ability, believing that as I was paid the largest salary I should carry the heaviest responsibility. My work was filmed by KCL Education Department for use in their PGCE course and I have given talks at various colleges and schools on a variety of educational subjects, from teaching poetry to ‘tackling’ sex education. I have never subscribed to the Gradgrind theory of education which is current now, but always believed that the job of a teacher is to enable her students to learn.

How do I do publicity? Feeling embarrassed and groaning. I was lucky that I didn’t have to do any for my first 14 books because the big companies I wrote for took care of all of that. But I do now and it makes me cringe. I’m not cut out to blow my own trumpet.''