A change is as good as a rest they say and with this in mind, we have now changed the racy 2-door blue Alfa Romeo for a reliable red 4 door Volvo (with child seat in rear). It is as it says on the tin. Solid, dependable, Swedish and starts with one of those funny block things. The Alfa was none of those. It was an Italian car, and so was built for the wide open Italian roads, where the sun shines down, and the breeze gently blows and where it bowls along at speed with Volare by Dean Martin on the sound system. What it got instead was rain, snow, slush and potholes you could go caving in.

The Alfa used to express its dissatisfaction by continually going wrong, and informing us in no uncertain terms of how it felt. Every time we set off, a series of crisis alerts came up on the dashboard: Rear left sidelight not working, we were informed. Motor control system failure, we were told. Front headlight not working. And so on and so on. And that was on top of the Possible ice on the road and other potential weather hazards that it felt it had to warn us about. Why it couldn't just come straight out with it and say: I hate this sodding country, I never knew, but over the years we had it, its discontent cost us enough to keep a small African township in food for a year.

The other way the car let us know it was unhappy was via the parking sensor. Every time BH backed it into a parking space, or up the drive, a small squat evil Italian Mama clad in black waved her gnarled finger and shouted: No.. No..NONONONO! Or at least that's what it sounded like. My friend Elissa has a similar problem. Her car is one of those people carriers (she has 3 kids and a dog) and it has parking sensors on all sides. Parking it is like being attacked by a trio of smurf castrati.

A further problem with Elissa's car is the colour: it is metallic silver, like practically every car on the road nowadays which means whenever we go out, we almost always lose it in some multi-storey car park. The time we have wasted going from floor to floor, suddenly locating it, but then realizing at the last minute that it is not hers. We have even resorted to walking up and down pressing the key fob in the vain hope that it will beep and let us know where it is hiding - because honestly, that is what it feels like at times. The conspiracy of cars. I'm sure it exists. 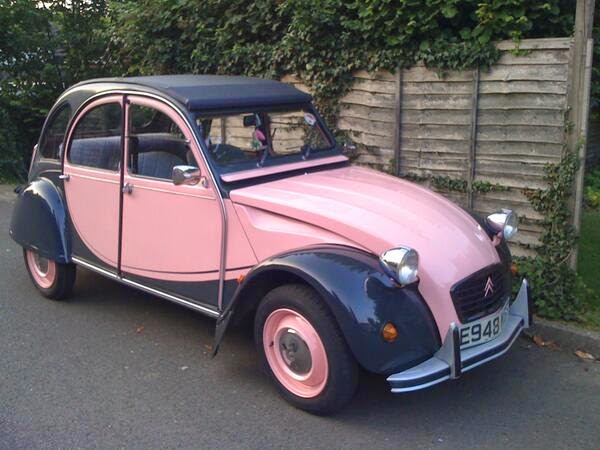 My car on the other hand, is French and so it couldn't give a damn. You can kerb it, or park it askew, or scrape it along something, it just shrugs and goes tant pis. It also has this habit of taking on other cars, especially the 'baby on board' black land cruisers driven (badly) by the blonde yummy mummies who live in my town. I call them Harpies (a portmanteau word for Harpenden Mummies).

These behemoths are completely unsuitable for the narrowish streets that surround my house and my 2CV hates them. Seriously. Whenever we get into a confrontation on a bridge or up a hill, it simply refuses to go into reverse. Just waits, sneering with Gallic insouciance, until the other car is forced to back down. Or up. Nothing I can do, honest.

We are thinking of putting my car up as a candidate in next May's local Town Council elections, on the basis that it has no political affiliations, no loyalties to anybody, knows no developers, you can't bribe it and it does relatively little deliberate harm. Has to be an improvement on what we've currently got. And after all, if Caligula could make his horse a consul, I don't see why my car couldn't be a councillor, do you?

If you'd like to read a sample of my novel Diamonds&Dust A Victorian Murder Mystery, you can do so HERE. US readers can do so HERE