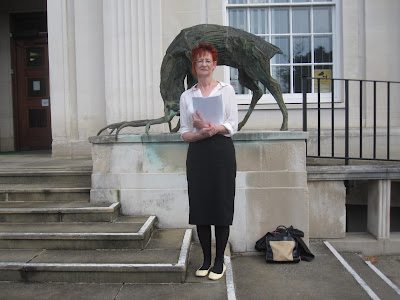 Take a good look. Are you impressed? This imposing edifice is County Hall, Hertford. On Tuesday morning it was where the Development Control Committee of 9 county councillors met to decide whether to reject my Town Green Application. The result was rather a forgone conclusion as Harpenden town council had issued threats of legal action if they did not. Having therefore turned it down 7:2 I feel the building should forever now be known as ''the place where Localism died''.

New blog followers start here: 15 years ago Harpenden town council closed my local allotment site, as it had plans to develop the land. There was no consultation; the plot holders were merely told to leave. Spaces were offered at another private allotment, some people just gave up. Since then local people have fought long and hard to save the site which is now home to a rare and legally protected wildlife species, and the adjoining playing field, which is a safe landlocked green space where children can run and play freely. Any development would entail building a road right across it, bringing traffic, pollution and changing forever the character of this last bit of the former Westfield Common. 15 years on there is still no consultation and the 100% Tory town council is still trying to force a completely inappropriate development into a completely inadequate space.

Typically, the local Harpenden councillor speaking against my application for Town Green status on our playing field chose to open his 5 minute speech by ''dissing'' me for my protest letters to the local paper and the things I write on this blog. Sweet. I have long ceased to be amazed at the way some of our local politicians have this arrogant attitude whereby they think it is perfectly acceptable to launch derogatory personal attacks in a public forum upon ordinary residents, who in this case are merely trying to preserve and protect a priceless asset on behalf of local people. Fine if you're in Parliament or in a council meeting with fellow councillors, totally out of order when aimed at hapless members of the community who may lack the necessary skills to respond.
Except that I don't. And I am ...

So apart from awaiting, and then continuing to oppose Harpenden town council's predictable response to the Town Green refusal, a possible option could now be to go for judicial review. To initiate this, I need either to rustle up a rich sugar daddy in the next 12 weeks, or get onto Kickstarter. If you can help in either category, do let me know. Haha. Particularly the former. Meanwhile, while the council grins, pats itself on the back and plans its next encroachment, some of the remaining allotment holders have been out on the land they have earmarked for ''affordable housing'', kindly taking pictures for me of the very rare and very legally protected IUCN Red Listed Roman snails that the council says 'do not exist'. 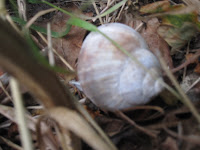 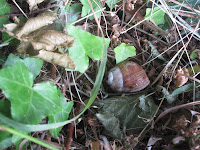