Bev Spicer is another of those lovely writers that I met since joining Twitter last August. Bev currently lives in France (the PINK SOFA is wooden with jealousy) with her family. She is a prolific writer and, as you will see, has had some VERY interesting jobs. I'm sure she will be delighted to talk about them later. In honour of Bev's visit, there are croissants and bowls of coffee on the coffee table and the PINK SOFA has tricolour ribbons tied round its legs and is humming the Marseillaise. So, Bev, over to you...

''Thank you Carol for letting me sprawl on your sofa. I would love to leave my mark, but that might not be socially acceptable to your next guest. (The PINK SOFA is used to the errant behaviour of its guests, so would not mind in the slightest) Well, I was the girl that was never chased in the playground. I hung around, but no one tried to catch me. In a game of kiss chase, it was the boys who were screaming. Between the ages of ten to thirteen I was designed to repulse. My grandmother insisted on dressing me in Jaeger dresses and designer fur-trimmed coats. The genteel assistants must have been horrified to see their beautifully cut clothes on an irregularly shaped potato of a girl with gappy teeth and piggy eyes.

I did not realise I was a 'minger' at the time. But I did have a great deal of time on my hands, while my peers were out at parties having fun and snogging boys (so they claimed). So I wrote stories for my sisters. I don't remember most of them, but I do remember one. And I recall my youngest sister begging me to write the next instalment so she could find out what happened.

Time moved on. I lost the pounds and gained a less frightening smile, becoming if not a swan, then a passable goose. I spent a lot of time travelling and worked as a secretary for a posh bin-bag company, a croupier for Playboy, a newly qualified and easily distracted secondary school teacher, a conscientious university lecturer and an extremely over-worked and under-paid examiner for Cambridge Exams. 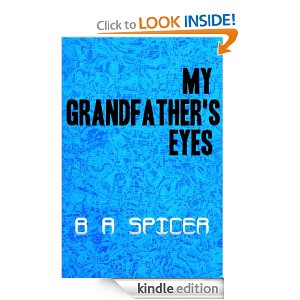 Then, I remembered that I quite liked to write. So, having produced what I mistakenly believed to be a finished book, I foolishly sent it off to be rejected by a selection of literary agents. When I had completed my third book, and learned about editing, I didn't want to spend months waiting for a junior agent to flick through a few pages and send me a polite stock email, so I took the plunge and published Bunny on a Bike, on Kindle, (a humorous memoir of my time at Playboy).

I followed this up with a mystery/psychological drama: My Grandfather's Eyes, which tells the story of  Alex Crane, a flawed heroine who discovers a family history that shocks her and reveals a secret she had subconsciously been aware of in childhood recollections and dreams 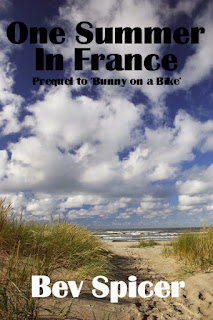 There was no stopping me after that. I wrote another mystery/family drama: A Good Day for Jumping with a complex plot and intriguing characters who share a secret past. And, because I so enjoyed Bunny on a Bike, I have just completed and published its prequel: One Summer in France, based on the study break I spent with my best pal in the south of France while enrolled on a language course at university. That's the story so far.


I have two more completed novels on my desk to work on, and another couple under my pillow and several more hovering in the space between my ears. Quite an achievement for someone who started out as a cabbage-patch child-model for Jaeger!

Thank you so much, Bev. What an amazing and very impressive story!! Bev will be staying around to answer any questions and chat, so do stick around.

If you have to go, check out Bev's blog: http://baspicer.blogspot.fr  where there are direct links to her books. The PINK SOFA also recommends that you read her blog post for the 27th April - one of the funniest posts out..

You can Tweet Bev @BevSpice
All Bev's books are available on Amazon as ebooks.