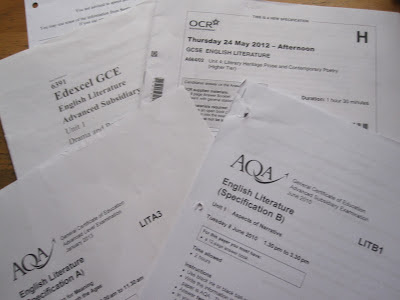 A busy time at Hedges Towers. Exam season is upon us once more, which means I'm currently doing my third part-time job as an invigilator. For those who don't live in the UK - invigilators are people who supervise public exams in secondary schools. In the past, it was a job done internally by teachers, but now it is done externally by us. Unsurprisingly, many invigilators are retired teachers -  after all we know the system and are used to working with groups of teenagers. It is a pleasant way to supplement our meagre incomes which doesn't involve unsocial hours and stacking shelves.

Basically, invigilating involves the ability to sit reasonably still for a couple of hours with one's eyes open. It is a lot harder than it seems. To distinguish us from the teachers and students, invigilators wear green lanyards with an ID badge. I'd really like something a little more distinctive - maybe a nice black leather jacket with Invigilator on the back in big brass studs, so that I could also supplement the meagre income by doing door work at the weekends. I have floated the idea past the Exams Officer, but he is thinking Exams Office budget, so as yet there is no interface.

The thing people always say when they discover I work as an invigilator is:  'Oh, exams were much harder in my day.' Not sure about that. Certainly not in the subject I tutor, English Literature. I have exam questions going back to the 1970's, courtesy of my old English teacher, and I often set them for students. The texts haven't changed much either. This year I have been teaching Paradise Lost Book 9, King Lear, 'Tis Pity She's A Whore, Othello, Dr Faustus, and The Pardoner's Tale, among other texts. The first two were books I studied for A level back in the 1960's.

What has changed is that back then if you were dyslexic, dyspraxic or, as in my case, just plain disruptic, no allowance was made. Now, students can get extra time. Some have readers or scribes. Or both. And the rise of the internet has brought a whole new rise in opportunities to cheat, so students can only use clear pencil cases and bring unlabelled bottles of water into the exam room, as it is possible to download 'fake' labels with formulae on the back. Seriously.

We are all extremely vigilant, but even so, we had an incidence of cheating a couple of years ago. It is still referred to in hushed tones. It was during an A-level resit. The senior invigilator noticed a student's ruler was sitting proud from the desk. She picked it up, and several strips of paper with notes cascaded down. The student, who had joined the Sixth Form in Year 12 from a posh private girls' school was escorted to the Exams Office, where the 'evidence' was photocopied. Her father was then phoned. His only response: 'Oh, you caught her, then?' Unbelievable.  Ultimate irony: she was resitting a Philosophy and Ethics paper.

Now I would never condone cheating in any form whatsoever, but the pressure students are under today is immense. I managed to score two unconditional offers to read English and Archaeology from London and York universities. Wouldn't happen today. In fact some of the 'top' universities are now asking for A* grades. In certain subjects, namely Art, Design, and Creative Writing, they expect students to have a blog up and running too.

Back then we left with a degree, the expectation of a reasonably paid job, and if you managed it correctly, no debt. I ran a baby-sitting business, and worked for John Lewis at the weekend and in the holidays, so I came out with money in my pocket. In many ways, I'd hate to be eighteen today. Which is just as well, because even with the huge advances in medical science and plastic surgery, it is extremely unlikely to happen!
Posted by Carol Hedges at 23:52