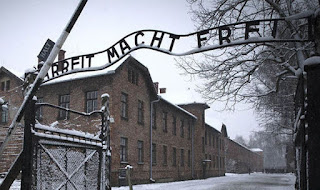 
We live in a 'post fact' (or as I prefer to call it, downright lies) era. This means that the internet is currently ablaze with Holocaust deniers, claiming that the massacre of Jews, gypsies, disabled people, and gays, under the Nazis did NOT happen.

The survivors of Hitler's 'Final Solution' are gradually dying. Those that are left, frail but undaunted, spend their last few days having to tell their harrowing stories over and over again, as the stinking sewage of denial washes through social media. When they are gone, who will bear the torch?

As many of you know, I am the daughter of German Jewish refugees, and post the fiasco that was Brexit, I have applied for and received restored citizenship, so that my descendants will never have their 'Citizen of the World' status wrenched from them, as my grandparents' and parents' right to citizenship was by the German government. At the head of this piece is the visual proof, taken from German documentation, of the 'fate' of my paternal grandmother.

But this is my mother's story, not mine: she was born in Berlin and as the anti-Jewish laws started coming into force, she was in her early twenties. She had to leave university, where she was studying art & design, and went to work for one of the many Jewish organisation that had started getting Jewish families out of Germany as they could see what was going to happen in the future.


She helped organise Jews leaving Germany, and her refugee organisation supplied the papers and documents needed. These organisations also helped make the situation of German Jews very public and were hated as a result. Eventually, Hitler decided to close the borders. The last train was scheduled to leave Berlin on December 7th, 1941.

The way my mother always told it: she sent her own parents to the UK where, as the Daily Mail article shows, the identical 'anti-semitic/illegal immigrant' rhetoric was alive and well then, as now, but she felt it her duty to stay in Berlin and help out to the end. 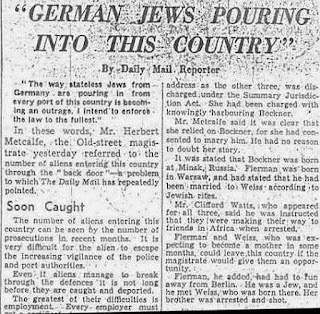 So it wasn't until the last day that she packed her suitcase and headed for the station. The queue stretched for yards. She stood in line, wondering whether she was too late. Then the German police started going down the line, checking passports and documents. Time ticked on. Finally they reached her, and roughly demanded her papers.

My mother handed them over. A brief scrutiny. A consultation. A list was checked. Then she was beckoned out of the line and ordered to go with them. Her heart sank. Was she about to be refused exit? Was she going to be imprisoned? Tortured? Deported to a work camp?  She followed the police .... along the platform ... past the waiting crowd ... straight to the barrier where the train was waiting.

A curt command and the barrier was raised. She was pushed onto the platform. The barrier was closed. Still not quite believing what had just happened, she took her place on the last train and came eventually to the UK, where she met and married my father, also a refugee. Nine years later, I was born in the UK.

My father's family refused to leave Germany, believing, as so many EU citizens, migrants and refugees believe today, that civilised people would never try to deny them their human rights. They perished at Auschwitz. My parents died many years ago. I am now the bearer of my family's story.

If you read a tweet, or an article, or a book by someone denying that Hitler and his military machine ruthlessly and systematically exploited, tortured, and murdered eleven million human beings whose only 'crime' was that they were not ''them'', then remember this: the people who ignore the mistakes of the past are destined to repeat them.

Over and over again. 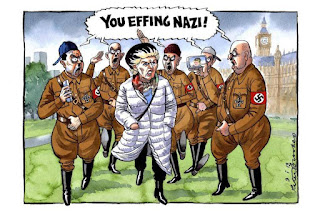