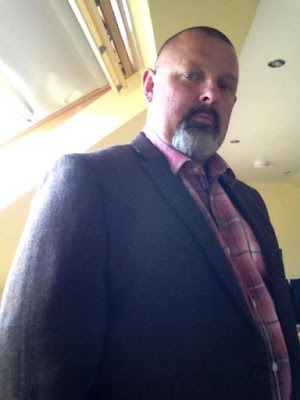 The Pink Sofa has been on Twitter since July 2012 and one of the first friends it made was writer, gardener, and all-round talented bloke Jonathon Fletcher. Jonathon has advised the sofa on many issues, from planting potatoes in the Hedges Towers allotment, to acquiring dodgy illegal space weaponry that enhances its status with lady sofas. The SOFA welcomes him back, minus armour and arms, to chat about his Space Navy Series, now appearing in print form for the first time. Getting into print hasn't been easy ... as he now reveals.

'It’s more than wonderful to be back on the pink sofa again. I see the cakes have improved somewhat since my last visit. Must be going to Waitrose now, Carol?

I write a military science-fiction / space-opera book series, called the “Space Navy Series”. It’s set in the near future. Humans have colonised other planets and there is a war going on. Typical military sci-fi stuff.

What I think sets my series apart, is that I spend a great deal of time developing the characters and I cross genres. There’s a great deal of horror in my work and a conspiracy plotline that would usually be seen in a thriller. Things are never what they seem. One reviewer described my books as “Star Trek meets Full Metal Jacket”. Think “Game of Thrones” mixed with a little “X-Files” and “Starship Troopers” and you’re getting there. 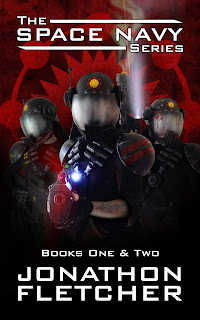 Carol has asked me to talk about publishing my books in print for the first time. I initially published everything on Kindle through KDP. It was a (relatively) easy way to self-publish and get my stories out there. For anyone who’s interested, I did a blog on formatting for Kindle on my Goodreads author page.

I started with four, novella-length books and then the fifth book became full-length. I started with shorter books to ease myself into self-publishing. I was originally going to publish the paperbacks through Createspace, but then KDP started doing print books through the same platform as Kindle, which made life even easier.

It took me a long time to pluck up the courage to go to print. For one thing, learning the formatting is harder than Kindle. In a Kindle book, there’s no such thing as pages. You delineate chapters, but each page of text simply runs into the next. The reader chooses the font size on their Kindle and that makes the pages longer or shorter. For print, each page is definite, set in stone, and you must make sure they all face the right way.

However, the main reason I took so long is that I’m a stickler for editing. My first book was good, but needed polishing. As I’ve developed as a writer, I’ve got better at it. I waited to commit to print until I was confident that I could present a professional looking book. So, the first thing I did before going to print was to go back and re-edit my books. I addressed some formatting issues, some feedback from reviewers, tightened up the dialogue and added a few extra scenes which I thought were necessary.

My first print book is a compilation of the first two Kindle novellas, “The Might of Fortitude” and “Morgenstern”. Because of that, I decided to have a brand-new cover, rather than a re-hash of the first two. By this time, I had built the trooper costume for promoting my books at ComicCon (I’m also a professional prop/model maker) and so I used the trooper on the cover. 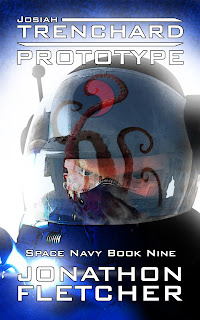 To begin with, I was more worried about getting the format of the cover artwork correct than the inside material. For instance, the number of pages changes the spine width. But in the end, the cover was quite easy. I downloaded a blank, formatted Word document from KDP for an 8x5 inch book. So, I made the front cover 8x5 in photoshop and used Cover Creator to do the spine and back for me. Simples.

Getting the inside formatting right was much, much harder. I couldn’t figure out the headers and footers. I couldn’t get the page numbers to flow consecutively. Every time I cut and pasted chapters in, fonts and line spacing would change. My first attempt had all the pages facing the wrong way so the chapter headings were on the left-hand side.

With time and a great deal of patience, I learned some new things about Word and ironed out all the problems. I now have a formatted Word document that I can simply drop chapters into, for when I get around to publishing my second paperback. I did the same for my Kindle books. I recommend it as a method of working; rather than creating a new document each time you write a book and having to re-do all the formatting, save a pre-formatted document that you can use as a template.

There’s nothing more satisfying for an author than seeing your work as a physical, print book. I will never forget the first person to buy my book at Newcastle ComicCon. He is a wonderful guy named Martin and is ex-Royal Navy. As I’ve based my future military on the British Royal Navy, rather than the more common American Marines model, Martin was a perfect customer for me. My books are full of “Jackspeak”, the slang of British sailors. Martin, a “skimmer” rather than a “sun dodger”, loved the book and gave it a very good review. I’m very grateful for that, as most people don’t bother to post reviews and they are SO important for us self-published authors. There is a book called “Jackspeak” by Rick Jolly, for anyone who’s interested in naval slang. It’s available from Amazon and a percentage goes to a military charity.

The first Space Navy paperback is available from Amazon. I’m planning to release parts three and four (“Berserkergang” and “Onamuji”) as a paperback next year. Then each book from “Belatu-Cadros” onwards will be a paperback in its own right. I’m doing re-edits of them all now.

I’m up to book nine in the Kindle series and I’m hoping to publish “Josiah Trenchard - Prototype” by Christmas. The latest book sees my main protagonist facing one of his deadliest missions yet. Here’s the blurb…

“Josiah Trenchard is a no-nonsense, foul mouthed, alcohol fuelled action hero.
The clandestine “Society” have caused wars, killing thousands and placing Captain Trenchard in mortal jeopardy more times than he’s had shots of “Black Void” rum. Aska Saito, the Society’s prime agent, has divulged their darkest secrets to him, enabling Trenchard to warn the Society off. Trenchard thinks he’s got the Society off his back. He thinks that he can settle down to a quiet life of hunting down pirates in the asteroid belt. He’s never been so wrong…

When several prototype specimens escape inside an underwater Papaver Corporation storage facility, Trenchard and his crew are the obvious candidates to be sent on a daring rescue mission. The only clue as to what happened in the deepest, darkest ocean, is a distress message from a lone survivor; an old comrade from Trenchard’s days on Mars.
Meanwhile, Aska Saito is searching for clues to her past. With a bounty placed on her head she is forced to run, plagued by an enigmatic message and horrific dreams. To discover the truth, she will turn to an unlikely source for help.
Prototype; some things are best left buried.”

Captain Trenchard has developed over the years. He’s a simple man who just wants to do his job, but his life is constantly made more difficult by other people. The Society have manipulated events in the United Worlds because they think they’re in the right. Initially, they’re portrayed as the bad guys, but as the series develops, the lines of morality become blurred. No one is whom they first appear to be.

I love to tear down stereotypes. Readers might expect my books to be a “sausage fest”. This book has a dwarf trooper in power armour and my first openly gay character, both women. I think it’s important to write as many and diverse characters as possible. It’s a big universe out there. Not everyone is a white, male with a jutting chin and rippling muscles. Heroes come in all shapes and sizes, creeds and colours. My strongest female protagonist is a Japanese woman called Aska Saito. She’s running for her life in the new book. Her story is becoming darker and more confusing as the books develop. She starts as a typical stereotype – a Japanese assassin, a cold killer who is adept with swords. By book nine, you realise that there is far more to her than meets the eye. Her story is as important as Trenchard’s. She’s vitally important to the plot and when her big reveal happens, I’m hoping the readers will be gob-smacked.

If you’re interested in reading the story of my no-nonsense, foul mouthed, alcohol fuelled action hero, then you can find my books here…''