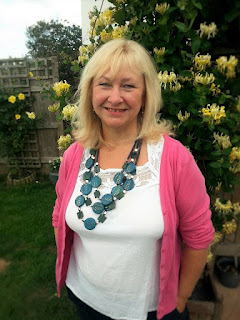 The PINK SOFA is always delighted to welcome back guests, especially when they bring scones. Therefore it is delighted to host Amanda James, who comes armed with bakery goods and a new book. She's visiting the Writer's  Attic to share what inspires her lovely novels. (With added scones, and Cornish clotted cream of course ...)

As you know my first book with Choc Lit was A Stitch in Time which I adored writing and it only took me six weeks for the first draft. I have never written one as fast before or since, but the ideas just flowed. I feel most comfortable with the suspense/mystery genre however, as those are the kinds of books I enjoy reading the most. Though I guess really, even though it is time travel, A Stitch in Time is full of suspense and mystery and I was so pleased to be able to return to the characters to see what they had been up to when I wrote my sequel Cross Stitch.

Anyway, I digress. I was inspired by the novels of suspense authors, Dean Koontz in particular. He has sold over 450 million books yet still had the time to answer my letters in his own hand. He encouraged me to keep writing! As a reader, I love to try and figure out what is going to happen, what the secret is or who done it etc. He often has a romantic element in his stories and so do I. Koontz often has a paranormal angle also and I enjoy writing those too. I like reading straight suspense novels, but the added excitement and freedom to go ‘outside the box’ which is afforded by the paranormal is very liberating as both a reader and writer.

Certain people inspire me to keep going when the going gets tough too. There are many, but one in particular sticks in my mind. Korczak Ziowalski was a sculptor who decided to dedicate his life to carving a memorial to Crazy Horse the great Sioux leader. The sculpture is actually made from a mountain in South Dakota! It is as yet unfinished and being continued by his family after Korczak’s death more than twenty years ago. He started it all by himself in 1948 with a tent, an old Jeep, $174, and a dream. His motto was , ‘Never forget your dreams.’ I added ‘never give’ up to that. I was lucky enough to visit the memorial and found it an enriching and life-affirming experience. His remarkable story can be found here : http://crazyhorsememorial.org/

I often get the whole story from a title. I can’t actually put finger to keyboard if I don’t have one. I think of a title, something catchy or familiar like ‘a stitch in time’ for example, and then I build the story around that. Somewhere Beyond the Sea was a combination of being by the sea, Doc Martin and the need for a catchy title. The old Bobby Darin song was perfect. Sometimes I really don’t know where I get ideas from. They just kind of pop up. The inspiration for Summer in Tintagel came from a walk along the cliff tops. As I stood on the edge looking onto the rocks I thought how easy it would be to step off and end it all ... if a person was so inclined. I’m not, in case you were wondering! Then it kind of came to me from there. I visited Tintagel Castle a few weeks later and thought that it was the perfect setting for a novel – full of history and mystery. 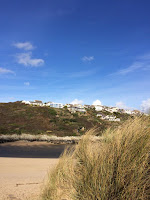 My new novel, Behind the Lie has lots of secrets, mystery, and suspense and set in London, but mostly on Crantock, the idyllic Cornish beach about twenty minutes from my house.
One day I was walking on the beach as I often do and looked up at a beach house. It was the kind of house that I tend to drool over from time to time, as although I can see the ocean from where I live, it is five-miles distant! It’s the white square one with all the big windows.

My imagination began to make up the person that lived in the house, and Holly West, my main character waved at me from the window. Well, she didn’t really, but you know what I mean.... Also the lonely rugged coast helped me to visualise Holly and all her problems and I knew I needed to help her solve them. I am also in love with the sea. My dream from being very small was to move to Cornwall particularly the north coast and I am overjoyed to have realised it. Just the sight and smell of the sea lifts my spirits and inspires me.'' 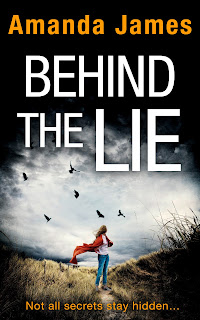 Book Blurb Holly West has turned her life around. She’s found a successful and loving husband in Simon and is expecting twins. She is definitely a woman who has taken back control of her future.
Until she gives birth, only for one twin to survive. Holly can’t let it go.
Holly’s world is in a tailspin and suddenly she can’t trust herself or anyone else. No one believes her, not her husband or her best friend. Because she thinks she knows the truth…her son is still alive and she won’t stop until she finds him.
Buy Links – https://www.amazon.co.uk/Behind-Lie-Amanda-James-ebook/dp/B06XKCP4L6/ref=asap_bc?ie=UTF8