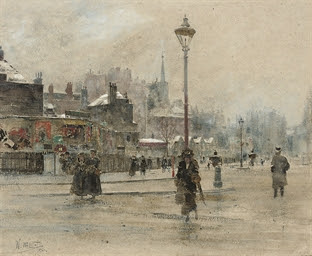 Even if you aren't a christian, chances are you will have heard this carol being sung or played around this time of year. It was written by Christina Rossetti, sister of the far more famous Dante Gabriel Rossetti, a leading light in the Pre-Raphaelite movement.

Christina Rossetti was born in 1830, and died in 1894. Her life spanned the mid-Victorian and late Victorian period. She was the youngest child in an incredibly talented family. Her father, the Italian poet and political exile Gabriele Rossetti, immigrated to England in 1824 and established a career as a Dante scholar and teacher of Italian in London.

Of the two 'famous' Victorian poets, Elizabeth Barrett Browning, and Christina Rossetti, I find Rossetti the more fascinating. At a time when women were expected to marry and limit their sphere of influence to hearth and home, she never married, although one of the Pre-Raphaelite brethren, James Collinson, proposed marriage in 1848. She turned him down, citing her conversion to Anglo-Catholicism.

Rossetti was on the fringes of the Pre-Raphaelite brotherhood. She witnessed the chopping and changing of partners, the artistic compositions and radical lifestyles of the set. Yet she never acted as a model, nor was included fully in the activities of the group. Her poems often convey a sense of the 'outsider', the unnamed and unnoticed woman standing in the doorway observing, but not intruding. 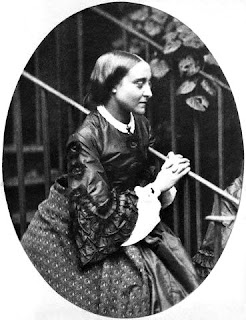 Much of Rossetti's poetry is strong and strident and passionate, which makes her unusual given that her sex was supposed to be self-effacing and emotionally docile. Her verse is very female-located. In her poems 'Maude Claire', 'Cousin Kate' and 'Jessie Cameron' none of the men are ever named. All the women are named or given a voice.

Over the centuries poetry has been considered the highest form of literature, and thus up until the late Victorian period, consigned to the 'male' domain. Its anti-woman critics have always pointed out the 'public' nature of the poet and how that sat at odds with the domestic nature of women. Rossetti subverts the traditional gendered expectation, firstly by being a woman poet, then by asserting female emotions, identity and superiority over and over again in her verses.

Rossetti's own life frequently filters into her work. For ten years she worked at St Mary Magdalene house of charity in Highgate. It was a refuge for 'fallen women', the 'soiled doves' of Victorian society. This experience colours such poems as 'Goblin Market', her finest poem, where the goblins (men) are seen offering luscious fruits to seduce innocent young women. Rossetti makes clear her disgust of the commoditization of sex, but also subtly shows how 'tempting' temptation really was.

'Goblin Market' is often mistakenly seen a children's poem. It goes deeper than that. Apart from a radiant depiction of sisterhood and the importance of female friendship in a dangerous and predatory male world, I think Rossetti is subconsciously exploring the radical idea of a 'woman Redeemer' in Lizzie, the 'golden haired/white dove' who saves her sister by offering money to the goblins, but refusing to taste their evil fruits. Instead, in a copy of Christ's last supper, she invites her fallen sister, who succumbed to temptation and is now dying, to 'taste' the juices she carries, and so be healed through her. (I am not sure Rossetti would have agreed with my feminist critique, but to me, the meaning is clear.)

Like her Victorian counterpart Elizabeth Barrett Browning, Rossetti suffered from a variety of illnesses all her life. She was variously diagnosed with angina, TB, neuralgia and once with 'religious mania'. It is a moot point whether these were actual complaints, or part and parcel of being a very gifted, sensitive and intelligent woman poet at a time when such an occupation was still not totally accepted. It was only a few years on from the 'shocking' unmasking of Acton, Ellis and Currer Bell as being women novelists (the Bronte sisters).

Many times during her life, Rossetti had to learn to control and subdue her nature. It was not always easy. As she wrote in later life to her niece “You must not imagine, my dear girl, that your Aunt was always the calm and sedate person you now behold. I, too, had a very passionate temper; but I learnt to control it. On one occasion, being rebuked by my dear Mother for some fault, I seized upon a pair of scissors, and ripped up my arm to vent my wrath.''

In 1893 Rossetti was diagnosed with breast cancer and underwent a mastectomy that was performed in her own home. The cancer recurred the following year, and after months of acute suffering she died on 29 December 1894. She left behind a body of verse that is largely unread and unknown today, apart from the carol In the Bleak Midwinter, Goblin Market and the plangent Remember Me which is often recited at funerals. If you get a chance over the Christmas period, she is well worth seeking out.