The Pen Is Mightier Than The Sward 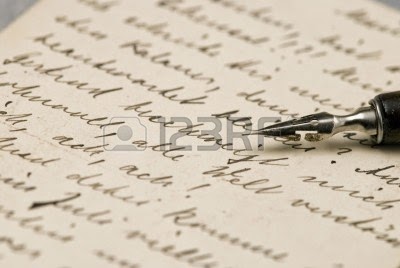 Most of you know that I am a local ''activist' (or bloody nuisance, depending upon what side of the Council fence you sit). For the past seven years I have campaigned to save an ex-allotment space from being sold off for ''affordable housing'' (see: http://carolhedges.blogspot.co.uk/2013/07/localism-harpenden-style.html if you have enough time or a strong stomach.)

Much of the campaign has been conducted via letters in the local paper. The Editor is happy to publish what I see as wryly witty Swiftian missives, because they wind people up, and anything that provokes debate is good for sales. The letters have quite a following ... especially when I get piled into, and I have to say that very little of what I get on Twitter compares to the splenetic rantings of the ironectomied in response to something that was written with tongue firmly planted in cheek.

Which segues nicely into the new Strategic Local Plan - something all local authorities have to produce. Ours has now shuffled shamefacedly into the light of day. An independent consultant has looked at a Google Map, seen some green bits, and decided they'd be good to build on. One bit contains a local bluebell wood and a newly refurbished teenage playground, but let that pass. The main problem is that a rented farmer's field to the North of Harpenden (the posh Tory bit that NEVER has any major development. Ever.) has been highlighted as a potential housing estate.

Cue angry letter from 'No I Am Not A Nimby' resident, saying that it would be far better to sacrifice local allotments than build on his bit of ''Greenbelt''; allotments being a minority hobby, taking up a lot of urban green space that could be more usefully turned over to housing. It needed a reply, so I wrote to the paper proposing that instead of sacrificing valuable allotments that provided havens for wildlife, and food for hard-pressed families, the council might like to turn over some of the local golf courses to satisfy housing needs instead.

I suggested that there seemed little benefit in keeping all these rolling swathes of green grass merely to allow a small and exclusive elite to wander across hitting little balls into holes (sic). This would preserve the Greenbelt AND the allotments together. The response was immediate and totally predictable. However in an unexpected twist, last week when the furore appeared to have all died down, lo! another letter - not from One Of The Usual Suspects, but from someone actually supporting my 'suggestion', saying what a very good idea it was, and that they hoped the council would seriously take it on board.

I am gleefully awaiting the inevitable response, pen in hand, ink pot at the ready.

If you would like to read a free sample of my novel Diamonds& Dust, A Victorian Murder Mystery, you can do so HERE. US readers can do so HERE

Update: Another letter in this weeks' local paper supporting my idea of building on golf courses. This could run and run....or stroll and stroll.