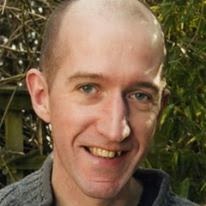 The Pink Sofa's guest today is truly 'Renaissance Man'. Simon is an actor,writer, musician and the only Green councillor on St Albans District Council (so far). He is also part of the St Albans Literary Festival (as am I). Simon has been hugely helpful to me in my efforts to stop our urban green space being sold off to a developer by my unscrupulous Town Council, and he has freely helped and advised HIP in our campaign to be elected to the District Council. A man of talent and generosity! I asked Simon to talk about his various roles and occupations......

''I trained as an actor and had a reasonably successful career in theatre for about 15 years. Later I moved in to writing of various sorts, and that's mostly how I earn my bread and butter now. I still do the occasional film or TV job when one comes along, and the one I dine out on most is Harry Potter. I was cast as a Deatheater in Harry Potter part seven.

Typically for these huge films, I was booked for months, then ended up working for just one day, and am on screen for about five seconds. The money they spend on these films is astonishing - I had two duplicate handmade costumes, all the props I saw were beautifully made, and there were about 200 people on set all day to produce what was a relatively small and simple scene, inside the train. All the Deatheaters had their own personal wands, and mine is now in its specially marked box near the gift shop of the Harry Potter Studio Tour at Leavesden Studios in Watford. 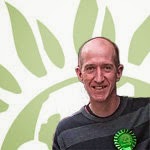 I studied politics at university but never thought I would end up being a politician. I joined the Green Party while a student, as I thought their manifesto was amazing - positive and radical, but also realistic. I slowly got involved in local parties when I lived in London, and when I moved back to St Albans I found that there was a substantial level of support for the party even without any local campaigning. Over the last eight years local members have worked to build focussed support in central St Albans, until the point that I got elected in 2011. Now we find ourselves able to achieve all sorts of things in the Council, partly because the ruling Conservatives are a minority. And we're looking to get more councillors in the coming years.

Being the only Green is a challenge, as I don't have the support of more experienced colleagues. And for the party to be represented in committees and in debates, it basically has to be me or no-one. But council staff are very helpful, and I've learnt a lot from members of other parties too. I also have great support from my fellow local party members, and from other Green councillors around the country. 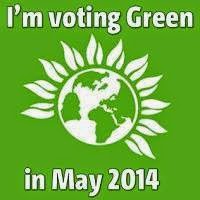 I write for a living - part time for a firm of communication consultants in London, called Quietroom, and occasionally scripts for children's TV. Any parent of small children will probably have seen my work - show like Tweenies, Fimbles, Big Cook Little Cook, Waybuloo and Wibbly Pig. Beyond this, I produce most of the written words that come out of the local Green Party - press releases, newsletters, stories for our website, and the manifesto - things like that. I keep a twitter account going, on politics and local matters, and have a Green-oriented blog too, at www.greenstalbans.blogspot.com, which has a mixture of local stories and commentary. I juggle all of this with being a dad to an 9-year-old, and a husband of course. My wife works full time, though not conventional hours, so between us we get everything done.

I don't have a novel in me, I'm quite sure of that. A sitcom maybe, or a children's play adapted from a book, but not a novel. Last year I was invited me to write a Lego-themed puppet version of Cinderella, that was performed at Legoland Windsor. Which was nice. I'm lucky as a writer in that I always know I'm going to get paid for the writing I do. I admire the motivation of people who can spend all that time and effort producing a novel without knowing a. if anyone's going to read it, or b. if they're going to make any money out of it. I suppose if you get your money somewhere else that's fine, but for me writing has always been a job. A job I really like - don't get me wrong. But still a job.''