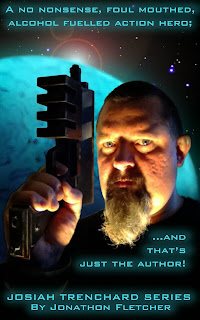 Jon is another of those amazing people I met on Twitter. Not many people would use a scary picture of themselves holding a weapon as a cover to their own book. Yes, that IS him. The PINK SOFA is hiding behind itself. Jon has helped and advised me with techie stuff, and is always on hand with gardening tips. And he writes amazing books, as you're about to discover. A truly talented man! With his own space weapon. As the festive seasson is upon us, I have broken out the Danish Butter Cookie tin, and there is freshly brewed coffee to go with it. Over to you Space Captain:

''I grew up in near and after school completed an art foundation and then went on to a film and animation degree in . As I have always been a science fiction fan, my final year film was a sci-fi epic called “Unity” which I did all the special effects for. After the degree my first job was as a prop maker at Cosgrove Hall Films in Chorlton-cum-hardy where I worked on “Brambly Hedge”, “Rocky and the Dodos” and Gerry Anderson’s “”. After about a year there I left to help set up a new animation company with a great bunch of people and became head of the props department at Hot Animation in Altrincham. I worked at Hot for around nine years in which time I predominantly worked on the first fourteen series of “Bob the Builder”, eventually becoming Art Director on that show. I also did occasional work on “Pingu” and various pilots.

When the company was closed down and I was made redundant, I fell back on my other passion, gardening. I took my redundancy money, bought a van and tools and became a full-time gardener.I always have a lot of free time in the winter and also felt that I needed an outlet for my artistic side. I hit upon the idea of self publishing on Amazon and my first Novella “Josiah Trenchard Part One: The Might of Fortitude” was published in October 2012. Self publishing draws on my experience working with scripts in the film and TV industry and I build models for the covers and then Photoshop the artwork, a skill I picked up working as an Art Director.

The idea for my books came directly from my final year degree film. It was a sixteen minute short science fiction film entitled “Unity”. Ever since I made that film I have been developing the ideas as scripts and those scripts have now become the basis for the Josiah Trenchard series of novellas and the forthcoming “Unity” series of novels. I was heavily influenced by Isaac Asimov’s “Foundation” series, the TV show “X-Files” and films like “Aliens” and “Bladerunner”, so the books reflect those. They’re military sci-fi with a story arc and sub-plot that is closer to something you would see in “X-files” or “Fringe”. Josiah Trenchard is a separate mini-series based in the same universe but following different characters and events. I wanted to test the waters of self publishing with something small before I put all my effort into one massive novel that may have flopped. So far, Trenchard is doing quite well and readers seem to like the series, judging by the reviews I’m getting.

I treat writing like any other job. I do a little every day at the same time, before I go out to work as a gardener. In the winter when I’m not gardening I tend to write all morning and then do jobs around the house in the afternoon. I have a story arc for the ten episodes of Josiah Trenchard already worked out and each part deals with a separate horror / sci-fi theme. Part one was about the ship itself and the bad guys were deadly space pirates. Part two has a Frankenstein style monster, three is my take on Jekyll and Hyde and part four has zombies. It’s just a case of filling in the blanks around the framework that gives me and developing the characters.

I chose to self publish simply because it was a quicker route than finding an agent and I was confident that I could do it. Plus I have a business plan that follows ten novellas and a series of Novels that I don’t think any publishing house would have opted for with an untried author. I’ve been a sci-fi nerd all my life. I know what makes our kind tick. My marketing is aimed at people like me. Military sci-fi is a niche, so there’s no point trying to market towards romance readers. However there are elements of horror and thriller plots in my books, so I cover a fairly broad spectrum of readers.

My basic premise for Trenchard was “What if you replaced Captain Kirk with a hard ass?” Trenchard is heavily influenced by Gene Hunt from “Life on Mars” with a little Dirty Harry thrown in. I wanted a flawed Captain; he drinks, he smokes, he swears prolifically and he loses his temper often. But he gets the job done no matter what. He becomes known as “The Fixer” and his ship, the Might of Fortitude, is sent into the most dangerous situations. He works for the United Worlds Space Navy who are locked in a guerrilla war with desperate Insurgent terrorists and pitiless space pirates that haunt the outer reaches of the asteroid belt.

As part of the plot his crew are mainly young, inexperienced and occasionally downright useless. He has to mould them into an effective fighting unit along the way. One of my favourite characters to write is Paddy McGagh, a hard drinking Irish man who is seven foot tall and built like the proverbial brick privy. He takes no nonsense from anyone and is probably the only crew
member who can match Captain Trenchard drink for drink.

Without giving away spoilers, there’s a series of devious bad guys who crop up regularly including a young female Japanese assassin who causes Trenchard no end of trouble and the Machiavellian Papaver Corporation. Each episode has a new monster to fight, be it vicious pirates that would happily flush you into open space, a deadly cyborg covered with spikes called the “Morgenstern”, or flesh tearing zombies that are practically impossible to kill!

For the tech-heads out there, each episode introduces new weaponry too that dispatches enemies in a variety of delightful ways. Watch out for the W.A.S.P. grenades in part four, a particular favourite of mine and the acid rifles. Each trooper is armed with a “Vicar” assault rifle and as Commander Skelat will tell you, ‘this particular Vicar ain’t the nice kind that you invite round for tea and  cucumber sarnies. No he’s not. He’s the sort of Vicar who sticks a crucifix up the enemy’s arse and then drowns them in the font!’ 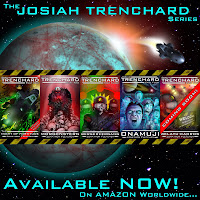 For the immediate future I’m hoping to publish part five in time for Christmas 2013. The whole of this episode is a flashback and you get to find out about Trenchard’s past and exactly what happened in the Belatu-Cadros uprising on Mars four years ago. Then there will be five more episodes to come after that including… wait for it… a Christmas episode!

After the ten episodes of the first series, I have two full length “Unity” novels at a draft stage and then potentially a second series of Trenchard. One thing is for sure, episode ten will not end well for our illustrious Captain Trenchard and the readers are going to be desperate to find out what happens next…''

Jon can be contacted via Twitter @JonGardener
His blog and links to the Unity novels are at: https://sites.google.com/site/unitynovels/system/pages/matureConfirm?path=https%3A%2F%2Fsites.google.com%2Fsite%2Funitynovels%2F

Thanks Jon. So, as we dig into the biscuits and pour the coffee, why not sit down and ask Jon something. Anything. I promise he won't zap anybody. Well, he SAID he wouldn't....