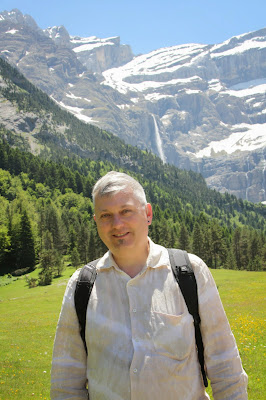 It's not often The PINK SOFA has a chance host such a talented and versatile writer, poet and photographer as Paul Tobin. He grew up in Widnes, but has lived in Somerset for 30 years. Paul has written poetry since he was 12, and thinks he's getting the hang of it now. He has published two volumes of poetry.
Paul has been Festival Poet at Purbeck Folk Festival (2011), the Accoustic Festival of Great Britain (2012) and Lechlade Festival (2013). He has also appeared at Wychwood, Bristol Folk Festival (2012) and Cock& Bull (2011). His blog, Magpie Bridge is always worth dropping in to. As The Pink Sofa is currently revising its first book of poetry: Upholstery Thoughts, it is agog to see how a professional does it.

''Every poem benefits from being revised and every poet worth their salt revises their work.  This is where the hard work comes in and where you develop your skill.
A little while ago, after I suspect a surfeit of apocalyptic reggae, I got to comparing the end of the academic year with the extinction of species - as you do. This is the poem I came up with:

END of SPECIES EXAM
Now the jig is up, the experiment nearly over, it’s time for the exam. Please answer the following questions as completely as you can. Your answers may be of interest to some future species or some extra-terrestrial life form, if they can be bothered to come so far to see the pig’s ear we’ve made of this place.

Was the trek out of Africa worth it?
Agriculture, what was that all about then, especially when the big supermarkets started stuffing both the farmers and the shoppers?
As a species why were we so good at murdering one another?
What was so brilliant about privatisation anyway?
If “war is the locomotive of history” how much of a twat was Trotsky, Mao or Stalin discuss? (NB if these names do not appal then insert one that does, there are enough of them to choose from).
Why did we let some of the world starve when the rest of us grew fat?
How does David Cameron sleep at night?
Why did we spend billions of pounds on Trident and why is it still pointed at Russia?
How much blood to the nearest pint is on Tony Blair’s hands?
What was the point of Boris Johnson?
As a species why do we believe in ideologies over common sense?
How hard did the present cabinet have to work to look so bloody smug?
Why was the Daily Express not sold as a comic?
Did you really believe the Tories when they said the NHS was safe in their hands?
Why are no city bankers in goal or at least destitute?
How could anyone have believed all that other shit the Tories told us?
Why did we go into Afghanistan without an exit strategy?
Nuclear power, who did you really expect to clean up all the crap?

As you can appreciate, in this draft it is rather a formless diatribe, not that this stopped me from reading it out at an awards evening for a local poetry competition when it was barely a day old (mind the gap between what I say and my own actions…). Even as I stood there full of righteous ire proclaiming for all I was worth. I realised that it was far to hectoring.
So what is wrong with this draft? It’s too long, it pounds the listener into submission (or boredom which is worse). It repeats itself- which is something to be avoided. In short it is far too pointy finger.
On the plus side I liked the rambling introduction to the questions. I wanted my northern voice to set the scene and so used one of my mother’s expressions.
Several months later it had slimmed down and I think is a better poem.

END of SPECIES EXAM
Now the jig is up, the experiment nearly over, it’s time for the exam. Please answer the following questions as completely as you can. Your answers may be of interest to some future species or some extra-terrestrial life form, if they can be bothered to come so far to see the pig’s ear we’ve made of this place.

The big trek out of Africa- was it worth the effort? Discuss.
Agriculture-what was all that about then? Pay particular attention to the supermarkets and how they set about stuffing both the consumer and the producer. Illustrate your answer with drawings of supermarkets burning.
Did you really believe the Tories when they said the NHS was safe in their hands? Answer yes or no.
To the nearest pint estimate how much blood is on Tony Blair’s hands.
State, to the nearest year, when you came to believe that we should pay for our own education, then comment on the fact that the people who told us we had to pay benefitted from free education themselves. Pay particular attention to their moral bankruptcy.
How long, in weeks, did it take the Tory government to look so bloody smug?
And finally, why did we allow them to get away with it for so long?

I think this version works better. What do you think?

I’d like to leave you with a couple of writing tips:

Always revise. Evaluate every word-does the poem still work if you remove it? If it does-leave it out.
Join a writing group, develop analytical skills.
Read you work aloud, it will sound different. Better still get someone else to read it then you can really hear how it sounds.
Read as much poetry as you can. Look at the structure of the poems you like, what makes them work?
Leave your poem alone for a couple of weeks-time will grant you a more critical eye.
Never be too in love with a specific line-remove it if it stops the poem working. You can always use it again somewhere else.
Lastly keep on writing.