A Highly Regrettable Incident At Sainsbury's

A roller-coaster week at Hedges Towers.  It started with an incident of possible criminal activity at our local supermarket - though in his defence, BH pleads accidental error of judgement and mitigating circumstances. We were doing the weekend shopping at the time. Usually BH does this on his own because he says that whenever I accompany him, off-list items find their way into the trolley, although I claim that they would have been on the list had I known, when drawing it up, of their existence.

Be that as it may and it was, I was scouting round for extra stuff, when I noticed BH standing very close to a trolley parked in the veg aisle. He was staring fixedly at the contents. Then he bent down and reached in. At which point the owner of the trolley arrived, gave him a 'what the hell?' look, and wheeled it swiftly away. There subsequently ensued the following exchange:

Me:  What on earth were you doing?
BH: I thought it was one of those reduced trolleys.
Me: They don't do reduced trolleys in Sainsbury's.
BH: Don't they? I thought they did. It had some good bargains. There were some nice carrots.
Me: But it was that man's trolley.
BH: (peers at items) Are those on the list?
Me: (firmly) You are in no position to query anything.

Let it be stated that two seconds later, we were both leaning against the meat counter helpless with laughter, and being given a very wide berth by passing customers. I have mentally stored the incident up to use as ammo in future negotiations, a tactic I highly recommend.

Meanwhile in the parallel world to yours, i.e. the one which is inhabited by me, we have had some 'developments'. The decision on our Town Green application has been put on hold pending the outcome of an appeal on a previous and very similar case to ours called the Barkas Case. Oh unconfined joy! As the options were: nope or wait, we are happy to settle for wait, as it gives us legal threat lines when our beloved Town Council, having decided to make economies by cutting their integrity and accountability budget altogether, decides to have another go at our playing field.

Which they will. They have now had to withdraw their flawed planning application for the second time, thanks to a devastatingly effective and pretty well continuous email campaign. Hahaha. There must be staff in that Planning Department who are only now dusting themselves down and emerging out of hiding. Magic Finger Hedges, they call me. Well no, that is probably NOT what they call me, but hey, it worked. (Tip for anybody running a similar campaign against a local council: always copy the Chief Exec, the Head of Planning, the Monitoring Officer, plus any supportive Councillors into anything you send to minions. It worries them. A lot.) 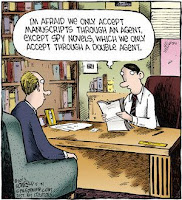 Which makes me wonder: Local Government machinations... corrupt councillors ... is there perhaps a book in all this? The Vacant Casualty springs to mind as a possible title... what do you think?

Apropos of nothing ... I was sent this great cartoon by a fellow children's author who'd recently discovered my 'Spy Girl' series. Thanks, Richard Hardie.
Posted by Carol Hedges at 00:11