Somewhere, in the Kingdom of earring backs, is a small tribe. They sit round their fire, toasting marshmallows and telling tales of how they escaped from my jewellery box, abseiled down the chest of drawers and headed off for freedom and a better life in the great outside world. It is the only explanation I can come up with for why I currently have a drawful of earrings, and hardly any backs. Not sure why I also have a pair of  gold backs that don't fit any of the earrings. Ear ringers? Socks ... don't even get me started.

Well, finally the end of an era has dawned. Last week, Talented Daughter moved out of the flat she has rented since her student days, gifting me with nine years of memories: being invited for my first daughter-cooked Sunday lunch. Dropping in with homemade cakes to supplement her student fare. Passing by on the 139 bus to West Hampstead station, and feeling my heart break into bits, because she was in Afghanistan and I wasn't going to see her for months. Helping her through the joys and traumas of life. Hindering her ditto....

Nine years of unbelievable hoarding has had to be faced, sorted and dealt with. Local charity shops have been overwhelmed and over-largessed. Ebay has run red hot. But at last, she has turned in her keys, and is happily ensconced in the new flat she and the Gallant Beau will share after their wedding in December. One era ends, and another begins. 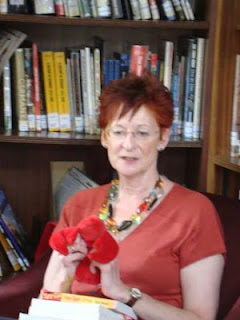 Meanwhile a similar process is about to happen on the book front, as I have now finished the rewrite of Jigsaw Pieces - the improved/adult version of my novel Jigsaw, which has been out of print for many years. OUP has returned my publishing rights. Editing has happened. Formatting has taken place, and I am currently doing a final line by line check, before it gets uploaded to Amazon Kindle.

Designer Dave has come up with a brilliant cover, which I will scan and put on the blog for you to comment upon. I'm pretty sure you will like it. Please give me feedback. So, all things being equal, I shall, like Talented Daughter, soon be moving also.

Not courtesy of two Bulgarians and a removal van, though, but under my own steam, inching the unicycle of endeavour across the tightrope of ambition. Probably juggling the beanbag penguins of optimism as I go. Do stick around; your sideline awaits....